Recent release “Deadeyes” from Page Publishing author Paul Kilbourne is a fast-paced thriller introducing Arthur Kneely, a middle-aged man whose once-promising life and career was derailed by a violent assault that changes him, fundamentally and forever. While he possesses several unusual talents of use to those close to him, his brain damage poses challenges- and dangers- to all who cross his path. 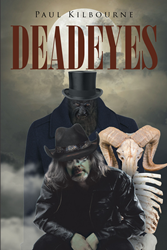 Paul Kilbourne is a New Jersey native, father, and former state powerlifting champion who spent twenty years in New Orleans, has worked in a variety of jobs including teacher, bouncer, and strength coach, and currently resides in southern Connecticut with his family of reptiles. He has published his new book “Deadeyes”: a gripping and potent debut novel.

Arthur Kneely, also known as Deadeyes, is a brain damaged former boxer, collegiate wrestler and debt collector in his early forties who lives in the town of River Ridge, New Jersey in 1973. He survives on disability, money he makes from bareknuckle fights, and a stipend from the local Catholic diocese. Because of his head injury, and the lack of control it has left him with, Arthur has killed several men. He is protected though by the local mob and police mainly because he has relatives in both organizations.

Arthur lives on one side of a house that he shares with a mentally ill cannibalistic former nun named Marie. His Uncle Kevin is a New York City police captain, and he enlists Arthur’s aid in solving the brutal murder of one of Arthur’s associates from years ago. Although Arthur’s injury has left him with a speech impediment and cognitive difficulties, his intuition proves invaluable in locating the murderer. When the two meet, all Hell breaks loose.

Published by Page Publishing, Paul Kilbourne’s engrossing book is a riveting thriller that keeps the pages turning until the dramatic conclusion.

Readers who wish to experience this engaging work can purchase “Deadeyes” at bookstores everywhere, or online at the Apple iTunes store, Amazon, Google Play, or Barnes and Noble.