Author Paul Shemella’s new book “A More Perfect Union” is a riveting sequel to his 2018 work “Jungle Rules” and a fast-paced tale of terror, vengeance, and justice.

Recent release “A More Perfect Union” from Page Publishing author Paul Shemella is a gripping and potent thriller putting the widow of an innocent victim of domestic terrorism and her husband’s best friend against a secretive cell of a white supremacist organization determined to wreak deadly havoc on targets in the United States to amplify their twisted and evil agenda. 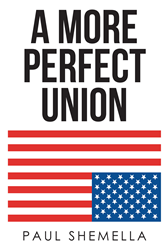 Paul Shemella is a former Navy SEAL who taught counter terrorism to foreign governments around the world. He has written important textbooks on terrorism, maritime security, and African governance. His government service spans more than forty years. He now lives in peaceful retirement with his wife in California. He has published his new book “A More Perfect Union”: a fast-paced drama and the second volume in a planned trilogy.

Paul writes, “The year is 1999. A tourist is killed, saving hundreds of innocent people at the Washington Air and Space Museum. A shadowy group calling itself DEFCON One claims responsibility for what is undeniably an act of domestic terrorism. The FBI believes the group is a covert terrorist cell within an overt right-wing militia, based in Wyoming. Recruited by the FBI, Gabriele Barnes, the grieving wife of the victim, agrees to go undercover as a confidential informant. Another source, now missing and presumed dead, has reported that the group’s inner circle accepts only married couples.

Jerry Tompkins, her late husband’s teammate and closest friend, agrees to ‘marry’ Gabriele. Together, they penetrate the secretive gang, living among them in order to gather enough evidence for the FBI to arrest the group. Gabriele has nothing to live for except revenge; Jerry vows to protect his friend’s wife—and use his considerable military skills to help her exact retribution. Too late, they realize that Gabriele is in way over her head, and Jerry’s military skills are not nearly enough. Trapped in a cauldron of white supremacist hate, Jerry and Gabriele must find a way to expose the gang for what it is, save their own lives, and prevent a catastrophic act of terrorism that will kill millions. And time is running out!”

Published by Page Publishing, Paul Shemella’s engrossing book is a spellbinding and timely work of fiction that keeps the pages turning until the stunning conclusion.

Readers who wish to experience this suspenseful work can purchase “A More Perfect Union” at bookstores everywhere, or online at the Apple iTunes store, Amazon, Google Play, or Barnes and Noble.