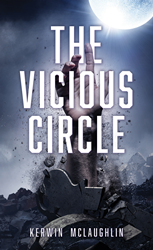 McLaughlin’s book explores good and evil and true consequences of one’s questionable actions. This story is a refreshing combination of classic literature and sci-fi action while at the same time, grounded in today’s political climate. For readers that enjoy action movies, superheroes and political thrillers but are turned off by their often anti-Christian slant, this book will be a refreshing read.

This fictional story follows Edward Gennaro, who by day, is a wealthy financier and his daughter Rainbow, who is a famous socialite influencer. At night, the father-daughter duo finance their lifestyle by robbing drug dealers, stealing from cartels, shaking down crime lords, and sabotaging corporate competitors. Edward’s abundance of power instigates an invitation to join an exclusive inner circle that runs the country. In desperate need for the money to join the group, he enlists his daughter for one last heist to steal a priceless diamond. The endeavor tragically takes a turn for the worst and Edward wakes, buried alive, in a strange forest full of misery and death. Readers will accompany Edward on his frightening journey, fighting horrors on the way to hell for all eternity. Will Edward persevere and escape from hell to save his daughter and the world?

“Like most guys, I grew up loving action movies and comic books,” said McLaughlin. “But the anti-Christian bias and woke agenda became too much for me so I decided to write something I’d like to read. Today’s entertainment has an agenda but no truth and art without truth is propaganda.”

Originally from New Jersey, Kerwin McLaughlin is a screenwriter and performer living in Southern California. He studied screenwriting and media arts at New Jersey City University. McLaughlin has been a corporate spokesman, a stand-up comedian and worked for years in the film and television post production industry. This book is his second novel. His first novel, Jerusalem, NJ takes biblical stories and sets them in today’s world.

Xulon Press, a division of Salem Media Group, is the world’s largest Christian self-publisher, with more than 15,000 titles published to date. The Vicious Circle is available online through xulonpress.com/bookstore, amazon.com, and barnesandnoble.com.