Author Pete Bonet’s new book “The Corso: The Real Nuyorican Salsa Story” is an entertaining reflection on a long and eventful life in love, family, and music 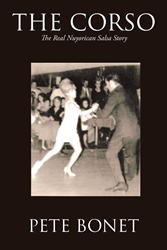 Pete Bonet is a US Air Force veteran, professional singer who has performed with over forty Latin bands and managed renowned Latin clubs in New York and Los Angeles, and happily married father, grandfather, and great-grandfather currently residing with his wife of fifty-seven years in Rahway, New Jersey. He has published his new book “The Corso: The Real Nuyorican Salsa Story”: an engaging memoir that has also been released in a Spanish language edition.

The author writes, “‘The Corso: The Real Nuyorican Salsa Story’ is a must-read book not just because it’s a fantastic and incredible story of success but also a historic legacy of how it was at the beginning of the salsa movement. It is narrated firsthand by someone who was there and was an important part of it, if not the most important. Pete Bonet was born in a very humble, extremely poor part of the island of Puerto Rico. Even the police would not go in there. It was too dangerous. It is a place called El Fanguito, ‘the Muddy’. His mother, Olga, was abandoned there with her six children, ages fifteen down to a newborn baby.

Pedrito, as he was called, was the fourth child; he was six years old when his father left for good. Olga was left alone with no money, no food, no man to protect the family, no government help, no nothing, not even shoes for the kids to go to school. The neighbors would say, ‘Poor Olga, she’s going to die along with all the six kids.’

Pedrito left that part of the world at the age of fifteen to go to New York City, not knowing how to say no in English. At the age of twenty-one, Pedro graduated from Central Commercial High School with honors in bookkeeping and business law, typing sixty words a minute without errors. He then took the test in order to enter the United States Air Force and qualified in administration and thus entered the United States Air Force.

Upon returning home with an honorable discharge, Pedro went to work for different construction companies as a timekeeper onsite—Marshall Const. Co., Arc Electric Co., Turner Const. Co., Melnick Const. Co., among others. He would go dancing on weekends to different nightclubs in New York City, from the world-famous Palladium Ballroom called the home of the mambo and cha-cha-cha, located on Broadway and Fifty-Third Street, the Manhattan Center on Thirty-Fourth Street, the Hunts Point Palace in the Bronx, and this was where Pete met the love of his life, Margie. They fell in love at first sight while dancing to the wonderful music of Tito Rodriguez and his big band orchestra. They got married six months later and still together today, in the year 2019, fifty-seven years and still counting.

Pete Bonet, as he got to be known, got into music by mere chance. He started singing with Alfredito Valdez and his charanga, then Ray Barretto and his charanga, La Moderna. Then he went with Mongo Santamaria and his orchestra under the musical direction of trumpet player Marty Sheller. He formed his own big band together with the great Louie Ramirez as his arranger and musical director.

By reading this book, you will get to appreciate that great era, an extraordinary moment in time, the very beginning when the term ‘salsa’ was born and started to be used instead of all the different names of all that great Cuban music. You will feel all the excitement of non-Latins dancing in clubs like the Corso that most likely will never be repeated again.”

Published by Page Publishing, Pete Bonet’s engrossing book is a gripping autobiography celebrating one man’s achievement of the American Dream and the rich history of Latin music in the United States.

Readers who wish to experience this engaging work can purchase “The Corso: The Real Nuyorican Salsa Story” at bookstores everywhere, or online at the Apple iTunes store, Amazon, Google Play, or Barnes and Noble.