Recent release “Whirlwind Book 1” from Page Publishing author Phil Lippner is a riveting novella that crystallizes the eternal conflict between the red lens of implacable hatred and the universal bonds of human life. A clandestine group bent on the absolute destruction of all countries thought to be involved in terrorist acts moves toward an ultimate act of annihilation; will humanity survive? 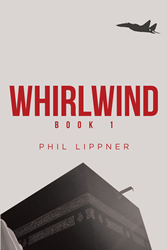 Phil Lippner is a retired government employee, former kickboxer and tournament judge, a pretty good poker player, and wildlife rescue volunteer living with his wife and several dogs and cats in the beautiful Sierra foothills near Yosemite National Park. He has completed his new book “Whirlwind Book 1”: a thought-provoking and suspenseful drama that keeps the pages turning until the stunning conclusion.

Phil writes, “A pilot in the Israeli Air Force has just lost his wife and daughter in a terrorist attack. Terrorist attacks are increasing worldwide, and people are becoming more and more angry.

While on a mandatory leave of absence, the pilot is approached by his cousin. Growing up, they were more like brothers. His cousin inherited the family jewelry business and is now one of the wealthiest men in the world. His cousin tells him that he belongs to an organization that believes there can never be peace with Muslims, and they have a plan to destroy Islam.

The organization has members in the military, government, science, medicine, education, and several other areas, not just in Israel but throughout the world, including the United States. Some members of the government and the military of both Israel and the United States have been calling for preemptive nuclear strikes against countries they feel have been sponsoring the recent terrorist attacks.

The pilot is to be a key in the success of their mission. They also have a key member is the US government, the vice president. She has her own agenda and the help of her daughter who is an electronics genius. In a matter of weeks, their mission could succeed, or the world could be destroyed in a nuclear holocaust.”
Published by Page Publishing, Phil Lippner’s engrossing book is a spellbinding drama that spans the globe with non-stop action and intense geopolitical and ideological conflict.

Readers who wish to experience this engaging work can purchase “Whirlwind Book 1” at bookstores everywhere, or online at the Apple iTunes store, Amazon, Google Play, or Barnes and Noble.