Recent release “The Great Crusade", from Page Publishing author Phil Skabialka II details the North Korean’s overtaking of the United States and their bloody and brutal campaign that steals the lives of millions of men, women, and children alike. 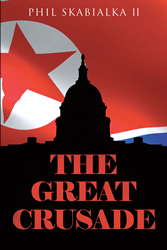 Phil Skabialka II, a first time author, has completed his new book “The Great Crusade": an intriguing work that delves into the terrifying possibility a North Korean takeover in the United States.

Skabialka writes, “With two hours left, we weren’t sure what the enemy would do, so we passed the time the best way we could. I peeked over the top of the crater, and the enemy came out of their positions with their hands up, so we moved out of the crater and started to round up the enemy. As the surrendering enemy soldiers were being cuffed and loaded up on trucks and being taken away, at that point the city was ours. The main enemy army was falling back to the west-side base of the Smokey Mountains. All Allied forces have reported that the enemy was on a full-scale retreat. We had retaken the colonies, and the enemy forces were on the run.”

Published by Page Publishing, Phil Skabialka II’s gripping thriller about Sergeant Keys, the only person who is able to save the United States from the grips of those that threaten to destroy them.

The rotten cancer of the North Korean occupation swept across the U.S. All who weren’t killed in combat were put in P.O.W. camps. This is the story of the last pocket of resistance that was able to turn the tide of war.

Readers who wish to experience this riveting book can purchase “The Great Crusade" at bookstores everywhere, or online at the Apple iTunes Store, Amazon, Google Play, or Barnes and Noble.

Page Publishing is a traditional, full-service publishing house that handles all the intricacies involved in publishing its authors’ books, including distribution in the world’s largest retail outlets and royalty generation. Page Publishing knows that authors need to be free to create, not mired in logistics like eBook conversion, establishing wholesale accounts, insurance, shipping, taxes, and so on. Page’s accomplished writers and publishing professionals allow authors to leave behind these complex and time-consuming issues and focus on their passion: writing and creating. Learn more at
http://www.pagepublishing.com.