Recent release “A Soul Returns” from Page Publishing author Phillip Wayne Cummins is a spellbinding drama that traverses the globe in a fast-paced game of cat and mouse between a powerful billionaire and those who stand in the way of his lifelong desire to destroy the state of Israel. 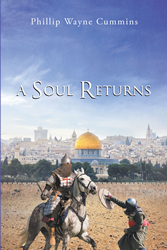 Phillip Wayne Cummins is a general contractor, father, grandfather, and avid outdoorsman presently residing in Story, Wyoming with Kim, his wife of forty years. He has published his new book “A Soul Returns”: an action-packed drama that keeps the pages turning until the stunning conclusion.

For generations, Sayyid Rashid, the wealthiest man in the world, has been manipulating the policies of both the Middle East and the United States to achieve his ultimate goal: the destruction of Israel. The owner of the world’s largest pharmaceutical corporation, he uses his vast wealth and modern medical technology to create a leader like the world has not seen since ancient times. However, he does not anticipate the evil that will be brought into the world. Could this be the fulfillment of two ancient prophecies?

The Templar Knights is an ancient organization whose modern-day reason for existence is to protect the nation of Israel. Searching for the only people who can disrupt Rashid’s plans, the Templars are led to the remote mountains near the Salmon River in Idaho. Will the Templars succeed in protecting them from Rashid’s men, or will they be destroyed by their own internal struggles?

Caught in the middle are twin brothers who were separated at birth and raised on opposite sides of the world. Now, one’s creation is out to destroy the world; the other is out to destroy the creation. Will one or both survive? As the world moves toward peace, can it be a true peace, or the greatest deception ever seen?

Readers who wish to experience this engaging work can purchase “A Soul Returns” at bookstores everywhere, or online at the Apple iTunes store, Amazon, Google Play, or Barnes and Noble.