‘The Forty Year Con Game: Everything You Need to Know About Donald Trump’s Threat to Democracy,’ by Dr. Michael B. Harrington, provides a thoroughly researched account of the 45th President’s first two years in the White House and his questionable dealings over four decades preceding his election. 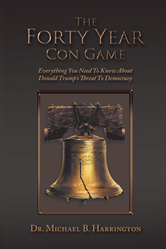 Democracy is fragile, not self-perpetuating. It requires tending for it to flourish. Incompetent, self-serving, and corrupt leadership poses an existential threat to its survival.

During the 2016 election, many voters were largely unaware that their soon-to-be president’s claims of success were a veneer cloaking his incompetence and failure as a businessman. As the 2020 election approaches, President Trump faces increasing skepticism among Americans – even those who originally entrusted him with their vote – that he is fit for high office.

“Having witnessed Trump’s skill at defrauding others over four decades, I was appalled by his election to the highest office in our country,” Dr. Harrington said. “Democracy is fragile, not self-perpetuating. It requires tending for it to flourish. Incompetent, self-serving, and corrupt leadership poses an existential threat to its survival.”

Dr. Harrington’s book serves as a cautionary tale. “The Forty Year Con Game” reminds readers that political con artists are common both in the U.S. and around the world and argues that Trump’s forty-year con game may be the nearest, most dangerous threat to democracy the country has faced since the Civil War.

“Dr. Harrington has had the courage to provide a well-researched, factual, informative book about the character of our current leader,” a reader wrote in a five-star Amazon review of the book. “It's a real eye-opener that sheds light on a national crisis.”

About the author
Dr. Michael B. Harrington is a former Marine and Foreign Service Officer, and he most recently served for more than three decades as a national security analyst for a large federal research and development center. Dr. Harrington earned his doctorate in economics and management science from the University of California, Irvine, and has authored numerous studies at various levels of classification for highly specialized audiences and several journal articles. This is his first book. Dr. Harrington currently resides in a suburb of Washington DC. To learn more, please visit http://www.centralvirginiawatch.com.