Thomas R. Knox shares the rich historical makeup of Twin Lakes and reflects on how the region has thrived as a result of good stewardship. 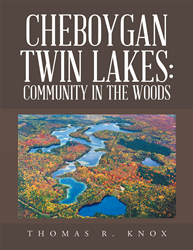 This is an environment success story that really illustrates how individual people can have a big impact on protecting and preserving our planet. It shows that we don’t need to rely on the government to care for these resources – We can and should do it ourselves.

Author, retired professor and avid outdoorsman Thomas R. Knox has published his comprehensive manual for a new generation of Northern/Central Michigan lakeshore property owners, many of whom grew up in urban environments, that offers a modern sketch of Twin Lakes and describes the historical context – geological, geographical, economic, military and social – in which it has previously existed.

In “Cheboygan Twin Lakes: Community in the Woods,” Knox celebrates a vigilant community’s success in protecting and monitoring Twin Lakes and implores posterity to adopt the same strong sense of stewardship toward the small kettle lakes that have allowed this region to flourish for many years. Knox’s book also examines how the social composition and relationships of a lake’s populations may be a key factor in the success or failure of lake management and preservation.

“The beauty of the lake, its unspoiled appearance and the community effort that went into preserving this ‘gem’ deserve to be noticed,” Knox said. “This is an environment success story that really illustrates how individual people can have a big impact on protecting and preserving our planet. It shows that we don’t need to rely on the government to care for these resources – We can and should do it ourselves.”

Ultimately, “Cheboygan Twin Lakes” presents a thoughtful, realistic approach to sustainability and conservation by weighing the human impact on the environment and demonstrating the ways in which community engagement can continue to keep natural regions pristine as well as ecologically and environmentally sound.

About the author
Thomas R. Knox is a retired Bowling Green State University history professor who taught at the university for more than 35 years. Knox’s teaching and research specializations include British and Modern European history, World War I and local history, and he has authored several scholarly articles about late 18th- and early 19th-century England. Knox, who earned his doctorate degree from Yale University in 1969, has contributed to Past & Present, the Durham University Journal, Albion, the Journal of Cultural Geography and the Dictionary of National Biography. Prior to his career in academia, Knox served for four years as a Captain in the U.S. Air Force with a specialization in research. He has paddled, hiked, photographed and explored in the Northern Lower Peninsula and the Upper Peninsula of Michigan for more than 40 years, has been a cottager in the woods of Northern Lower Michigan for 15 years and is a skilled canoeist and kayaker who has lived much of his life near oceans, rivers and lakes. Knox has been married to his wife for more than half a century, and he has two grown children. He currently resides in Bowling Green, Ohio. To learn more, please visit http://www.trknox.com.