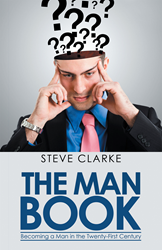 In the aftermath of 1960s feminist movement, multiple generations of men have suffered a masculine crisis. The situation has more recently been reinforced by the Me Too movement. To redress the balance, author Steve Clarke wrote “The Man Book,” a guide for how men can set their inner Man free and become the Men they were always meant to be by highlighting the qualities and behaviors of a Man (emphasis on the capital M).

The book begins by introducing the reader to the idea that while they may be materially successful, men are confused about their role, direction, and relationships with both women and other men. Clarke describes how the disconnect between the proper role of a male and his upbringing arose. He then describes what men can do to improve their position by describing attributes and allowing the readers to decide for themselves what to work on, what to accept, what to discard, and how to become Men.

“I have watched successive generations of men gradually become less and less sure of themselves, and more and more unsure about their connections with women both inside and outside a relationship, even in their everyday interactions,” said Clarke. “Once I realized what was going on, I set out to discover why it was happening and to offer ways to reverse the trend, which is exactly what ‘The Man Book’ does.”

Clarke goes on to describe how Men relate to the women in their lives, incorporating elements of romance, love-making, sexuality, female anatomy, and a light treatment of sexual dysfunction.

About the author
Steve Clarke is a former pilot in the British Royal Air Force with a degree focused on the interplay of psychology and economics in a business environment. He has led and inspired teams of talented men and women to exceed their expectations for many years.