Author Quan Jamel Fort’s New Book “America vs. America: A Manifesto for the American Woman” Is a Provocative Work Offering Well-Researched Insight on a Range of Issues

Recent release “America vs. America: A Manifesto for the American Woman” from Page Publishing author Quan Jamel Fort is a fascinating discussion of personality type and its influence on modern political realities. 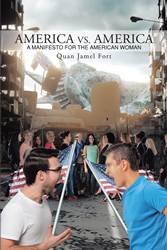 Quan Jamel Fort is a New York native who was raised in Binghamton, endured years of abuse at the hands of his mother’s boyfriend, and studied politics and law at SUNY Broome Community College. He has published his new book “America vs. America: A Manifesto for the American Woman”: a thought-provoking commentary on the past, present, and future of the US political system.

Politics is an extension of your personality. It all begins in childhood, particularly among individuals from large, traditional families. Each sibling in the birth order develops a unique personality, which then develops into extroversion or introversion.

As each sibling matures and grows, their personality begins to have an impact on their politics, with the extroverted siblings becoming more liberal and the introverted siblings becoming more conservative. This not only results in a divided family, but as the siblings go out into American society, they bring their politics with them, resulting in a divided America. When they register to vote, the more conservative join the Republican party while the more liberal join the Democratic party. They vote for political candidates who they believe support their political views. This has resulted in an extremely divided Congress and a constant fight over the presidency and Supreme Court.

Over the years, America has suffered from unregulated capitalism, endured two world wars, suffered through the Great Depression, suffered a military loss in Vietnam, a major terrorist attack on 9/11, suffered through the 2008 Great Recession, and may now be on the path to ether a dictatorship or a second civil war. Can we find some way out before it’s too late?

Readers who wish to experience this engaging work can purchase “America vs. America: A Manifesto for the American Woman” at bookstores everywhere, or online at the Apple iTunes store, Amazon, Google Play, or Barnes and Noble.