Author R.M. Yeager’s new book “Paper Ladies” is a gripping and potent work of detective fiction and the latest installment in the thrilling series of Sue Rider novels

Recent release “Paper Ladies” from Page Publishing author R.M. Yeager is a riveting journey through the investigative process as Sue Rider, FBI agent extraordinaire, hunts for a prolific serial killer on a murderous rampage along the beautiful and rugged California coast. With six recovered male victims and six missing young women, the clock is ticking as Sue races to apprehend a psychopath. 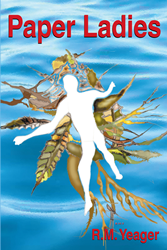 R.M. Yeager is a retired high school teacher, watercolor artist, and father of two grown daughters. He lives with his wife amid the Giant Redwoods of California’s north coast. He has completed his new book “Paper Ladies”: a fast-paced and suspenseful game of cat-and-mouse that keeps the pages turning until the stunning conclusion.

Yeager writes, “Two murderous monsters were on the loose in the world. Sue Rider would take her forensic investigative skills to the FBI’s new West Coast crime lab, while Burt Greenwood would leave the Soda Valley Police Department to become an agent for Homeland Security. At first, each agent thought they were hunting separate serial killers. Sue was on the hunt for a killer they believed murdered six men and abducted six additional women. Agent Greenwood continued in his pursuit of Ivan Henry Collins, an ex–marine lieutenant who was responsible for the deaths of more than thirty illegal immigrants, in a scheme to provide the criminal world with new faces and identities.

Slowly over time, both agents realized their cases were suddenly merging. Could they be hunting the same killer, or was there a second related psychopath stalking the Golden State? Following a scattered trail of clues that twisted and turned through the state, the two detectives would eventually join together to finally reach a shocking conclusion.”

Published by Page Publishing, R.M. Yeager’s engrossing book is a spellbinding tale of murderous psychopathy, investigative brilliance, and the long arm of justice.
Readers who wish to experience this engaging work can purchase “Paper Ladies” at bookstores everywhere, or online at the Apple iTunes store, Amazon, Google Play, or Barnes and Noble.