“12 Minutes: The Untold Story of the Ghost Plane at The Battle of the Bulge” from Christian Faith Publishing author Ralph Coleman Graham is a captivating tale of one young man’s experiences in WWII, from the unnerving build up to war through to an inexplicable event at the Battle of the Bulge that changed Graham’s life forever. 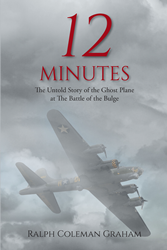 “12 Minutes”: a gripping and astonishing tale of a mysterious event at the Battle of the Bulge. “12 Minutes” is the creation of published author, Ralph Coleman Graham.

Graham writes: “The cloud cover had finally begun to clear after 8 days and nights. It was time for action. Both the Allies and the German forces had prepared for what was coming. It was likely to be the turning point of the air battle over Europe. Like most other airmen on both sides of the war, we knew how important our mission was this day. It could very well be the beginning of the end for the Nazi air forces, or it could set back our surge into Germany many months.

"Such was the mindset of most every member of the air group as we set our sights on the beginning of the most ambitious air assault ever. We were all nervous and afraid yet anxious to take off and do what we had trained for so long. Our ship was brand new and had been tested over and over for any possibility of malfunction. We were ready and so was our ship. Then, the unthinkable happened....”

Published by Christian Faith Publishing, Ralph Coleman Graham’s new book is the breathtaking tale of a mysterious event that changed the course of history for all members of a crew who fought in the Counteroffensive Attack During the Belgium Bulge Offensive, aka “The Battle of the Bulge.”

Written by a veteran of World War II, who at the age of eighteen volunteered fourteen months before the beginning of the attack at Pearl Harbor and the Declaration of War, Graham’s book conveys the horror and turmoil of the Battle with both striking honesty and commendable stoicism and objectivity. Above all else, however, the book excels as an examination of God’s guiding hand in the affairs of man and an account of one celestial intervention in particular that brought a crew of young Americans safely home from Europe while thousands perished all around them.

Consumers can purchase “12 Minutes” at traditional brick & mortar bookstores, or online at Amazon.com, Apple iTunes store, or Barnes and Noble.

For additional information or inquiries about “12 Minutes”, contact the Christian Faith Publishing media department at 866-554-0919.