Recent release “An American Dream” from Page Publishing author Ray Banister is a gripping and potent work of historical fiction introducing Rose O’Malley a young Irish girl who fled the Irish Potato Famine and arrived in America to an uncertain future. She came alone, on a disease-infested famine ship in the era of uncontested bigotry and legalized slavery and ultimately dedicated her life to eradicating injustice. 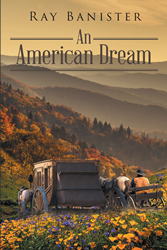 Ray Banister is a seventh-generation Irish-American who grew up in South Carolina, attended Clemson University before embarking on a twenty-one-year career as a tool engineer, and then retired to start his own business manufacturing medical prostheses. He has published his latest book “An American Dream”: a spellbinding and richly detailed portrait of a courageous young girl navigating life as an Irish immigrant in an America gripped by the controversial horror of slavery and leadup to the Civil War.

Beginning quite mysteriously in September 1845, healthy green leaves on potato plants suddenly turned black, curled; and then rotted. Then like an uncontrollable wildfire in a wind-swept forest, winds from southern England carried that mysterious blight to leaves of healthy potato plants around the Dublin countryside. As fungal spores they multiplied, cool breezes quickly spread that same unchecked blight to surrounding plants throughout all the potato fields of Ireland. This blight quickly became an imperiling devastation; casting Ireland into a horrifying tribulation. One-third of Ireland’s population had become solely dependent on the potato to sustain their livelihood…the Irish potato famine would reduce the already desolate Irish people to penniless dehumanized paupers and homeless outcast…the infamous Irish potato famine had begun.

Caught-up in the famine’s inescapable grasp was the Andrew and Mattie O’Malley family, innocent Catholic potato farmers with three children: two teen-age sons and a six-year old daughter named Rose. Their survival and existence now at the mercy of English and Anglo-Irish landowners who were loyal members of The Anglican Church of England

The British Government defended the vindictive landowners by failing to initiate any reactionary measures to relieve the devastating problems of the Irish people. The effects of not taking measures to address or reconcile those issues created a host of political, social, and economic factors that forever etched irreconcilable resentment and distrust on the English and Irish demographic landscape. But far worse was the direct devastation subjected on the helpless Irish people.

Over the next six years, more than a million Irish men, women and children would die from mass starvation or from infectious diseases resulting from that mysterious blight and the lack of government intervention. Another million would flee Ireland on questionable sea-worthy disease infested sailing ships dubbed “famine ships” or “coffin ships” to America.

This is a story of unrivaled courage shown by an eight-year old Irish girl; orphaned by the infamous Irish potato famine in the 1840’s. She came to America alone on a disease infested famine ship during the time of legalized slavery and uncontested bigotry and dedicated her life’s work to eradicate both.
Published by Page Publishing, Ray Banister’s engrossing book is a must-read for fans of Irish history, American history, and historical fiction.
Readers who wish to experience this engaging work can purchase “An American Dream” at bookstores everywhere, or online at the Apple iTunes store, Amazon, Google Play, or Barnes and Noble.