J. H. Sanderson presents new addition to Roadhouse Sons series, which takes its eclectic cast of characters on tour in East Berlin amid the Cold War 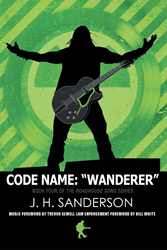 Book four takes the story of the Roadhouse Sons to the next level as they attempt to help smuggle individuals through the Berlin Wall without setting off an international incident.

Author and Roadhouse Sons creator J. H. Sanderson has released the fourth exciting installment in his espionage thriller series, which follows a fictional rock ‘n’ roll group, the Roadhouse Sons, after they are recruited by the FBI to monitor illegal activities on the club circuit during the Cold War era.

Set four years after the band tragically broke up, “Code Name: Wanderer” opens as the U.S. government again calls on the band’s former front man- and drummer-turned FBI agents to reunite for a tour in Germany that takes them into East Berlin, where they must help a defecting KGB agent before nuclear war breaks out.

“Book four takes the story of the Roadhouse Sons to the next level as they attempt to help smuggle individuals through the Berlin Wall without setting off an international incident,” Sanderson said. “It really speaks to the importance of never underestimating what someone has to contribute, appreciating an individual’s innate abilities and realizing that we are all, ultimately, responsible for our own lives.”

As the book’s eclectic cast of rock ‘n’ rollers finds themselves caught in the middle of a precarious foreign conflict on the brink of cataclysm, “Code Name: Wanderer” twines the glamour and gruffness of band culture with the austerity of covert FBI activities during the Cold War to present armchair adventurers with a thrilling new read.

About the author
J. H. Sanderson is the creator of the Roadhouse Sons series, a retired professional wrestler and a former road manager for a band. Sanderson, who is a member of Mystery Writers of America and the Author’s Guild of America, drew upon his own life experiences, history and personal encounters with members of the intelligence field when writing “Dangerous Gambles,” “Renegade,” “Cold Front” and “Code Name: Wanderer,” and his first two books have been adapted into graphic novels. Book one, “Dangerous Gambles,” was named the No. 1 Best Indy Comic in a 2014 Boston Comic Con roundup by The Vigilant Geek blog. Sanderson currently resides in Madison, N.H. To learn more, please visit http://www.roadhousesons.com or follow the author on Facebook and Twitter.