Recent release “Shifting Sands” from Page Publishing author Reuben Okorie is a gripping and potent story mirroring in many ways the European incursion into the African continent in the eighteenth and early nineteenth centuries. 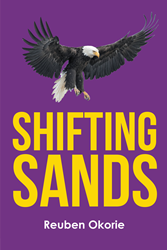 Reuben Okorie, a retired airline executive, tourism official, and former state chairman of the All-Progressives Congress (APC) in his native Imo State in Nigeria, has completed his new book “Shifting Sands”: a poignant novella and a resounding condemnation of colonialism.

Okorie writes, “Welcome to the uncanny world of obduracy and obstinacy and their attendant skirmishes that resulted in the collapse of a republic. Once you start reading this book, you will not drop it until the last page is turned.

Mazonia was a vast continent of many tribes with diverse languages and cultures. It had everything that could make it prosperous, such as temperate climate and rich mineral resources. However, those resources were not tapped; instead, the people were content with sustenance agriculture and local markets.

Luminia, on the contrary, was a developed continent seeking to grow her industrial base. When the Luminians got to know of a continent called Mazonia that remained uncharted, with untapped mineral resources, the floodgate for scramble for her lands was flung open. For the Luminians, the desire to grab as much Mazonian lands as possible became a do-or-die, all-comers affair in which Mazonian lands were unconscionably shared and the ethnic nationalities dispersed and dismembered. As a result, those unfortunate natives found themselves belonging to different Luminian countries, carrying different colonial baggage and subjected to burdensome alien practices and regulations overnight.

Megaterra, an intensely obdurate and perfidious nation, was one of the Luminian nations that vied for Mazonian lands, and she grabbed the largest and the most lucrative chunk, inhabited by three discordant big tribes, each of them big enough to be a country of its own. Megaterra conquered, colonized, and amalgamated the disagreeable tribes into one country, without due diligence, and named it Dimakanga, after the mighty river that snaked through it.

Compounded by the colonizer’s divide-and-rule policy, the forced, unholy alliance did not go down well with the people and the patchwork quilt began to give way. Three grueling wars of self-determination were fought, which forced the Republic of Dimakanga to metamorphose into three distinct sovereign nations.”

Published by Page Publishing, Reuben Okorie’s engrossing book is an evocative portrait of the destruction of culture and society in the wake of economic and cultural imperialism.

Readers who wish to experience this engaging work can purchase “Shifting Sands” at bookstores everywhere, or online at the Apple iTunes store, Amazon, Google Play, or Barnes and Noble.