Author Richard Haldeman’s new book “Charles Haldeman, A Memoir: Midcentury Journeys of a Vagabond Author” is the compelling biography of a short but remarkable life

Recent release “Charles Haldeman, A Memoir: Midcentury Journeys of a Vagabond Author” from Page Publishing author Richard Haldeman is a poignant biography compiled in memory of and as an aid to future students of his late brother’s life- a life that stretched from the Depression to the Cold War, encompassing three major wars and spanning the world from the United States to the Pacific, Germany, Greece and beyond. 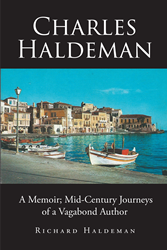 Richard Haldeman is a former journalist, English teacher, college public relations director, and married father and grandfather presently residing in Due West, South Carolina. He has completed his new book “Charles Haldeman, A Memoir: Midcentury Journeys of a Vagabond Author”: a poignant synthesis of his own experiences with his older brother, his letters, and the reflections of others who knew him best.

Charles Haldeman (1931–83) was a man with unusual literary and artistic abilities who sought to identify his and his generation’s mission in the world of the mid-twentieth century. Charles was born in the Depression; lived six months as a child in Hitler’s Germany during the 1930s; grew up in a US Army town during World War II; and traveled, studied, and worked throughout the US, the Pacific, Europe, and Canada during the mid-twentieth century. He lived his final 25 years in Greece, where he befriended and hosted the literary elite of this time and published three novels based on his experiences and knowledge of his generation and time. Charles Haldeman’s letters reveal his search for his own identity. He was born to a mother from the segregated South and a father who migrated to the United States from Germany less than a decade before Hitler came into power. From an early age he sought to understand and separate himself from the racism in his family’s American and German heritage, to reconcile the principles of the American dream with the reality of American life, and to help bring about a world in which human beings no longer used “war as a school for life” to build “monuments to stupidity.” Seeking a country where the artist had the freedom to thrive, he made Greece his home, only find ultimate disappointment in his “love affair with Greece.” Despite this disappointment and his early death, Charles Haldeman left a legacy of three novels that described a time in American and world history, giving voice to his “silent” generation. This memoir attempts to honor that legacy.

Published by Page Publishing, Richard Haldeman’s engrossing biography captures the spirit of a gifted novelist and true citizen of the world.

Readers who wish to experience this engaging work can purchase “Charles Haldeman, A Memoir: Midcentury Journeys of a Vagabond Author” at bookstores everywhere, or online at the Apple iTunes Store, Amazon, Google Play, or Barnes and Noble.