Author Robby Graham’s new book “The Third Clone” is a thrilling intersection of science and religion as two brothers jockey for success in their respective fields.

Recent release “The Third Clone” from Page Publishing author Robby Graham is the story of two brothers, Myers and Phillip, who work in two different fields but still compete against each other for success in their respective fields. After Phillip makes and conceals an important archaeological discovery that would alter the entire religious world, Myers searches for the shocking truth. 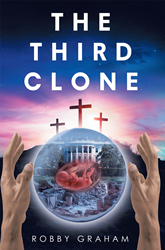 Robby Graham, a software developer with a logical understanding of reformed theology, has completed his new book “The Third Clone”: a gripping and potent intersection of religion and science as shown through the competitive nature of two brothers working in different fields.

Robby Graham writes, “Most of this book was written over two separate time periods. I first had the idea of writing this book in the 1990s. At that time, I had a beginning and an ending but no middle. I had no idea how to get to the end from the beginning. I thought and prayed about it over a span of twenty years. I prayed God would help me convey what He wanted me to convey. I prayed He would inspire me as to what to write. And I prayed that it could somehow bring Him glory in the process. Of course, God is not a short-order cook, so He taught me a thing or two about patience. Finally, in 2019, an idea came to me. Did He somehow inspire me as to what to write? Or did I just make something up? I once had a pastor that taught me to just make a decision, and it will be God’s will. Is that really true? Because I struggle as I believe most believers do, with the relationship between God’s will and my own free will.”

Published by Page Publishing, Robby Graham’s captivating tale follows two Bostonian brothers who have always competed with each other in their respective fields of expertise. Myers, the older brother, was a genius in genetic engineering; Phillip, the younger brother, was an archaeological genius in his own right. Each had two doctorate degrees from two different universities in Massachusetts. Myers loses his job for improperly experimenting with special genetic engineering for which his university disapproved, setting off an unpredictable chain of events that blurs the line between the scientific and theological worlds.

Myers could not stand the idea that his little brother was receiving strong media attention after a discovery in Israel that could turn the entire religious world upside down. Although significant and potentially world-altering, Phillip decided to hide the proof of his discovery from the world. After all, he, too, wanted more proof so he would know the truth for sure. At the same time, Myers desperately wanted to prove to the world that his genetic discovery was revolutionary. Myers decided to try his genetic engineering theory out, but only if he could come into possession of some of the fragments of proof Phillip secretly brought back from Israel. The ensuing adventure shows what happens if the world of science crosses paths with the spiritual realm.

Readers who wish to experience this mesmerizing work can purchase “The Third Clone” at bookstores everywhere, or online at the Apple iTunes Store, Amazon, Google Play, or Barnes and Noble.