Author Robert Henry’s new book “Detroit: The Magic is Dead” is an entertaining work of realistic fiction bringing the grit and greatness of a faded city to life

Recent release “Detroit: The Magic is Dead” from Page Publishing author Robert Henry is a spellbinding tale of talent, dedication, and friendship between four friends in the Motor City’s underground music scene. 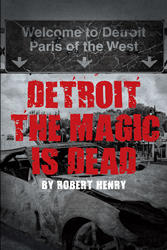 Robert Henry is a Michigan resident and father of three who has driven over one million miles in a commercial vehicle and currently shares his home with his golden retriever, Molly, and two cats, Minnow and Mika. He has published his new book “Detroit: The Magic is Dead”: a riveting story following the fortunes of a metal band in 1990s Detroit.

Known around the globe, Detroit, Michigan, is famous for grit, blue-collar workers, and murder. The underground music scene has produced many noteworthy bands, but in the 1990s it was Legend. The band formed when four friends wanted to change the stagnant hardcore metal scene, and when they added the best singer in the city, they took over. As the years passed, the band discovered that two things destroy kings—either they are overthrown, or they die from within.

Everything changes! The band rises in popularity, flirts with national success, but never quite makes it. The choice of one ultimately dooms the band and one of the members.

Readers who wish to experience this engaging work can purchase “Detroit: The Magic is Dead” at bookstores everywhere, or online at the Apple iTunes store, Amazon, Google Play, or Barnes and Noble.