Author Robert Murray’s new book “The Aftermath of the King: Volume 1” kicks off a series of Camelot Chronicles that introduces new heroes into Arthurian legends

Recent release “The Aftermath of the King: Volume 1” from Page Publishing author Robert Murray is Volume 1 of the Camelot Chronicles, a brand-new series that introduces new heroes and new life into the classic Arthurian legends. 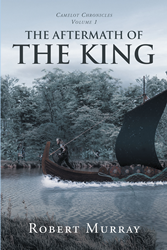 Robert Murray has completed his new book “The Aftermath of the King: Volume 1”: the first story of his Camelot Chronicles series that introduces some new heroes into the legends of King Arthur and his Knights of the Round Table. Murray is an avid student of the vast topic of history, both within his own family and the continents mainly of North America and Europe. As a child, his mother told him about the Snell Sword, belonging to their Puritan, New England ancestor, Amos Snell, and currently displayed in Pilgrim Hall Museum in Plymouth, Massachusetts. The Snell Sword played into his boyhood fantasies of Excalibur, the mythical sword pulled from the stone by Arthur. To be in an ancestral line in spiritual possession of a blade held in a place of eternal honor certainly captured Murray’s imagination as a child. Camelot was a boyhood refuge, and Murray found a way to give the Arthurian legends a future by building an artistic sanctuary for himself into adulthood.

Published by Page Publishing, Murray’s book follows Queen Guinevere, who is forced to emerge from a nunnery to rule Camelot and lead a quartet of knights on a mission to rid the land of a terrorizing force of Scandinavian marauders led by a fierce chieftain. Martain, son of Sir Kay, adopted brother of King Arthur; Elias, pious warrior monk; Shane, newly risen woodsman; and Varnell, student of Merlin, must trek the English isle striving to keep their oath to protect their Sovereign and restore order to the realm.

How shall the invader be dealt with? What former hero will re-emerge to offer aid? Will the question of legitimate succession be solved in order to allow a continuation of the tales of Camelot? Will a just King, elusive figure in the historical record, once again rule? All these conflicts will be resolved in elegant verse, the apotheosis of rhyme, derived, adapted, and perfected in order that the tales of Arthur’s heirs may be sung as they were meant to be.

Readers who wish to experience this riveting adventure for themselves can purchase “The Aftermath of the King: Volume 1” at bookstores everywhere, or online at the Apple iTunes Store, Amazon, Google Play, or Barnes and Noble.