Author Rohan Goodlett’s new book “Whom Can I Run to When I Need Love?” is a thrilling story about surviving hardships and coming out a stronger person

Recent release “Whom Can I Run to When I Need Love” from Page Publishing author Rohan Goodlett is a captivating story about Rohan Goodlett as he grows up living a sheltered life before embracing his dark side, despite his traditional upbringing, leading to years of hardships to set himself straight. 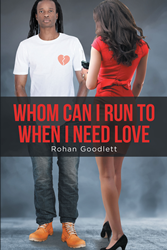 Rohan Goodlett, a self-taught barber and accomplished soccer player, has completed his new book “Whom Can I Run to When I Need Love?”: a gripping and potent story of the alluring pull of the dark side for a sheltered young man.

Published by Page Publishing, Rohan Goodlett’s engrossing and thrilling tale follows the author, who grew up in a traditional, wholesome family that shelters him from the darkness and brutality of the streets. When Rohan gets to high school, it does not take long before his repressed, insatiable desire to dance on the dark side becomes his unfortunate reality.

After graduating from Howard University, Rohan tries assimilating to the norms of corporate America. After an unpleasant experience at the Marriott, Rohan is forced to turn in his letter of resignation before he is terminated. Following that huge discouragement, he finds a job doing what he loves most—barbering. It is Rohan’s dream job, but the temptation to get back into the hustle of the streets is ever-present, soon overcoming him. During the next year, Rohan spirals downward, deeper and deeper into the hole than ever before.

When Rohan’s actions lead him to be incarcerated and admitted into mental institutions, he quickly discovers what when one is behind the wall, “there ain’t no love,” especially when one is branded with the label of being mentally ill. In this engaging story of love, loss, and mental illness, Rohan, a gambler, lays all his cards on the table when he finds himself believing murder is the only way out of a vicious cycle of lies and betrayal. As time grows nearer to his release, Rohan finds himself struggling to decide if he will go back to being close with the people who hurt him the most or if life will take him down a different path.

Readers who wish to experience this gritty work can purchase “Whom Can I Run to When I Need Love?” at bookstores everywhere, or online at the Apple iTunes Store, Amazon, Google Play, or Barnes and Noble.