Author Ross W. Simpson’s new book “Backseat to Baghdad” is a riveting retelling of the author’s military journey to Iraq and the great impact it had on his life

Recent release “Backseat to Baghdad” from Page Publishing author Ross W. Simpson is a gripping narrative of the author’s life as a news reporter sent on a mission to Iraq. 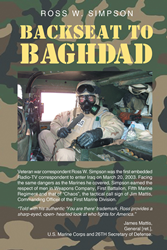 Ross W. Simpson, a dedicated writer who comes from a military family, has completed his new book “Backseat to Baghdad”: an engrossing memoir of the author’s moments of military service in Iraq that show his dedication and sacrifice for his fatherland.

Author Simpson shares the routine of soldiers who are tasked with perilous missions overseas: “It was ‘Shake and Bake Time’ when I rode into battle in Iraq with the First Marine Division’s lead assault battalion.

"I saw Operation Iraqi Freedom in March 2003 from the backseat of a Humvee in Counter Mech Platoon, 1st Battalion, 5th Marines.

"The first night was frightening as we crossed through “No Man’s Land” between two sand berms that separate Kuwait from Iraq, its warring neighbor to the north.

"Three weeks later we arrived in the Iraqi capitol of Baghdad, bloodied, but not broken.

“No better Friend, no worse Enemy” is the motto of the First Marine Division. And the author had no better friend in the military than Mattis who signed the American flag Simpson carried in his helmet liner before he left 1MarDiv’s headquarters in Baghdad and headed home to Northern Virginia.

"Their enduring friendship over three decades is why Mattis, the best-selling author of “Call Sign Chaos,” a book about learning to lead, graciously agreed to write a few words about Backseat To Baghdad.

“Today’s unsung heroes are those young men and women who look past today’s political rhetoric and volunteer their lives to defend America. In Backseat To Baghdad, Ross shows those troops in combat with all their humanity and humor and the tragedies and triumphs of young men coming of age when “they were soldiers once, and young.” Keenly portrayed thanks to his man deployments alongside them. In this book, Ross reveals the extraordinary character of our citizens serving as soldiers, sailors, airmen and Marines.” Jim Mattis.

Readers who wish to experience this captivating work can purchase “Backseat to Baghdad” at bookstores everywhere or online at the Apple iTunes store, Amazon, Google Play, or Barnes and Noble.