Recent release “Commander and Chief: An All-American Allegory” from Page Publishing author Russell J. Mathews is a compelling tale centered around the life and motivations of the first Native American president of the United States. 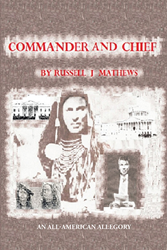 Russell J. Mathews is a former professional staff member for the US House of Representatives Committee on Government Operations during the 100th and 101st Congress who was elected for three terms to his State House of Representatives and later, as a private citizen and advocated for greater governmental transparency. He has published his new book “Commander and Chief: An All-American Allegory”: a gripping and potent literary debut.

Mathews writes, “The door slammed open. He was now in the open. He insisted on avoiding the underground tunnels of the US Capitol.

The Secret Service advance team had a fit. Too bad. He did it anyway.

Fierce and unrelenting, he chose his battles. He never lost a campaign. As a decorated Army soldier in Afghanistan, he worthily received several medals for valor in combat.

Then the impossible happened. A stealthier drone in the sky suddenly spit fire at the President from overhead. This dragon duped everyone, including the Secret Service. Its contrail sizzled at high velocity, hissing and whistling blasphemies against democracy and the new president. That serpent knew his face, and its package had the President’s name on it.

And next, a blinding flash.

It was as though the new President, Micco Menewah, had been blindsided by a thug in an alley—one that was meaner and more nefarious. The nation got played, and the President got popped. The opponent forced its hand with a fist clenched with no rules.

The heat intensified with a blinding white-hot flash, and then the lights went out for the moment.

The first Native American President of the United States of America will listen and then go to work, keeping his oath during his first day on the job.”

Readers who wish to experience this engaging work can purchase “Commander and Chief: An All-American Allegory” at bookstores everywhere, or online at the Apple iTunes store, Amazon, Google Play, or Barnes and Noble.