Author S.F. Gilbert’s new book “The Legacy” is a sprawling, multi-layered story begins set against the backdrop of the diphtheria epidemic and spans generations.

Recent release “The Legacy” from Page Publishing author S.F. Gilbert is an epic, multi-faceted novel that spans years, from the great diphtheria epidemic of the 1920s, the rush to deliver the vaccine to save the lives of the people of Nome, and one hundred years in the life of a prominent Canadian family, the Morrells. 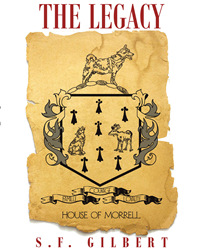 S.F. Gilbert, a Professor Emeritus at the SI Newhouse School of Public Communications at Syracuse University, a member of the NRA Ring of Freedom, and a former member of the United States Marine Corps, has completed his new book “The Legacy”: a gripping and potent grand tale about an epidemic and generations of one Canadian family.

“The story I am about to tell ignores the canons of conventional storytelling,” writes author S.F. Gilbert. “It has neither a beginning nor an end, and like life, it is an ongoing process coming to an end only to be reborn with each new generation that follows. It does not nearly fit into any one genre. Nor is it written linearly, but rather in a series of flashbacks.”

Published by Page Publishing, S.F. Gilbert’s majestic tale is several stories, intertwined and layered, that reveal more and plumb deeper that any one story could do alone. It is a sprawling adventure, a powerful love story, and an intimate character study, in which past, present, and future are inextricably joined, ultimately revealing what beats in the heart of a great family.

This grand novel is set against the tableau of a heroic mush to save Nome during the great diphtheria epidemic of 1925. It is the gripping story of Philippe Morrell and his lead dog, Balto, who made the run and the people, place, and events that made his life stand out far above those who had condemned him to the life of a social outcast. It also tells a vast story that spans one hundred years in the lives of the Morrells, a prominent Canadian family who built and controlled a powerful financial empire, but also of what they owed to the man who was their patriarch.

Philippe faced the harsh elements and his own demons during a raging blizzard in subzero temperatures, driving his dogs and himself with superhuman effort to deliver the diphtheria vaccine from Nenana to Nome across 650 miles of rough pack ice and frozen rivers. Near the end of a life filled with tragedy and triumph, at the extreme limit of human endurance where sanity and madness meet, on the verge of death itself, he finds redemption in himself.

Readers who wish to experience this epic work can purchase “The Legacy” at bookstores everywhere, or online at the Apple iTunes Store, Amazon, Google Play, or Barnes and Noble.