Author Sam Gefner’s new book “Secrets: A Memoir of Survival” is a deeply personal account of his parents’ life during and after their liberation from Nazi death camps

Recent release “Secrets: A Memoir of Survival” from Page Publishing author Sam Gefner is a remarkable family history detailing the traumatic pasts of his parents and other family members as Jews in Eastern Europe during the Holocaust and the struggles and secrets, triumphs and tragedies that have marked their postwar experience. 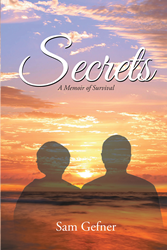 Sam Gefner, an Austrian-born child of Holocaust survivors who immigrated to the US at the age of three, grew up in the Bronx and Queens, New York, and retired after a forty-three-year career at various aerospace companies in the United States and Israel. He had since published his new book “Secrets: A Memoir of Survival”: a poignant account immortalizing the lives of two Holocaust survivors and their legacy of perseverance and sacrifice.

Max and Goldie were two Holocaust survivors who met in a Siberian detention camp during World War II. They both escaped from Poland at the outbreak of the war. Max was drafted by the Polish Army and left a wife and two small children in his Polish town. Goldie escaped to Russia with her older sister once the war broke out. Separately, Max and Goldie were arrested by the Russians and sent to the same refugee work camp in Siberia.

Near the war’s end, Goldie gave birth to a child from a Jewish Russian army officer she met and wed, who was shot down sometime before the end of the war. Max was informed earlier by underground fighters that his wife and children were taken from their town to a concentration camp in Poland and summarily gassed.

Goldie and Max were not communists and decided that they would both flee to western Europe after the war. Goldie’s sister decided to stay in Russia. Once the war ended, Max and Goldie trekked to Austria and were housed in an American displaced person refugee camp. Max and Goldie wed at the camp, and soon thereafter, Goldie became pregnant with Sam.

Six months after Sam was born, he developed a tumor on his brain. The American medics were not trained enough to deal with the complex pediatric condition, so they ordered a detained Nazi concentration doctor to assist in the surgery. Max was totally against that doctor touching Sam; however, Goldie insisted that she would make a pact with the devil himself if her son could be saved. The operation was successful, and as Goldie thanked the Nazi doctor for his assist, he coldly answered, “I am better at taking orders than I am a doctor.”

Two years after arriving in the US, Max and Goldie were strolling down the main street in the south Bronx on a Saturday night when Goldie, window-shopping at a shoe store, noticed someone trying on shoes in the store who had a very close resemblance to one of her sisters, Ann. Goldie told Max she was going into the store and would approach the woman. Max was unable to discourage her from what he thought was her wishful thinking. As she walked in and approached the woman, Goldie exclaimed, “Ann!” Bedlam broke loose in the shoe store.

Ann eventually becomes a key character who helps connect the shocking hidden links to Sam’s family story.
Published by Page Publishing, Sam Gefner’s engrossing book is a riveting true story that keeps the pages turning until the poignant conclusion.
Readers who wish to experience this engaging work can purchase “Secrets: A Memoir of Survival” at bookstores everywhere, or online at the Apple iTunes store, Amazon, Google Play, or Barnes and Noble.