Author Sam Neilson’s new book “Malibu Off the Grid! Mysteries and Secrets from the Past” is an up-close and personal tour of the storied California town

Recent release “Malibu Off the Grid! Mysteries and Secrets from the Past” from Page Publishing author Sam Neilson is a fascinating inside view of the legendary home of megastars and moguls. This entertaining work separates fact from fiction and offers plenty of tantalizingly personal glimpses of Hollywood royalty. 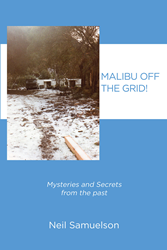 Sam Neilson, a native Californian who has lived in the Malibu area since 1959 has published his new book “Malibu Off the Grid! Mysteries and Secrets from the Past”: a deeply personal reflection on the people and landscape of California’s most glamorous town.

The author writes, “Most of you know Malibu. ‘Malibu off the Grid’ is the Malibu you don’t know. That is why the cover depicts snow and a trailer. Did you know it snows in Malibu? Most of Malibu is steep mountains and rolling hills. The coastline is just a small part of the scenery. That is why it is some of the most sought-after real estate in the country. Malibu is Hollywood’s movie set. In the early days, it was wild and untouched. They have filmed more movies, TV shows, and commercials in Malibu than anywhere in the country. Some of the movie and TV stars made the place they filmed at their home.

“Did you know Malibu had a nuclear missile base? In fact it had two. Malibu was also the home to Chumash Indians for ten thousand years. Living in Malibu is not for the meek. People who live in Malibu have been through hell. From the fires that blow in with the Santa Ana’s to the flooding and mudslides that occur in the winter. There is never a dull moment. Although it never rains in California, when it does it comes in buckets. Malibu wouldn’t have it any other way.

“Take a tour with me into the town of the rich and famous. Where your neighbor could be the Lone Ranger or the second man on the moon. A town where your famous neighbor might have the Beatles play at his house. You have to read the whole book. Take a chance. Find out if Linda Blair’s Volvo is haunted. If Don Drysdale gave out autographed baseballs for Halloween. Is the Hotel California really in Malibu?”

Published by Page Publishing, Sam Neilson’s engrossing book is a lighthearted reflection on a Malibu insider’s experience among the fascinating denizens of this legendary Southern California enclave.

Readers who wish to experience this engaging work can purchase “Malibu Off the Grid! Mysteries and Secrets from the Past” at bookstores everywhere, or online at the Apple iTunes store, Amazon, Google Play, or Barnes and Noble.