Writers on the Moon join NASA and other payloads on Astrobotic's Peregrine Mission One, marking return to the Moon, and the first mission carrying commercial payloads to the lunar surface 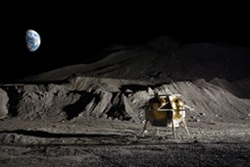 These works on the Moon speaks to the idea that, despite wars and pandemics and climate upheaval, humankind found time to dream, time to create art.

Canadian author and producer Samuel Peralta’s books are on a time capsule headed for the Moon.

Part of the Writers on the Moon (WOTM) project initiated by rocket scientist and author Dr. Susan Kaye Quinn, the time capsule is joining NASA’s own payloads on Astrobotic’s Peregrine Mission One, launching in July 2021 on a United Launch Alliance rocket to Lacus Mortis, on the Moon.

Dr. Peralta, a physicist and business leader who spent over thirty years in the energy and high-technology industries, is also a writer whose fiction has hit the Wall Street Journal and USA Today bestseller lists, and whose poetry has won awards worldwide, including from the BBC, the UK Poetry Society, and the League of Canadian Poets.

“I was fourteen on my first launch, an Antares model rocket kit by powered by an Estes solid-propellant engine the size of my thumb,” said Dr. Peralta. “Now I’m on a United Launch Alliance rocket powered by BE-4 engines made by Jeff Bezos’ Blue Origin. Wow.”

The centerpiece of Dr. Peralta’s payload is 'Memory's Children', a collection of his short stories, essays, and poetry, as well as the 21 volumes of his 'Future Chronicles' anthologies, all Amazon bestsellers.

Leveraging his allotted space on the capsule, he also managed to include catalogs from art exhibits he’s curated, musical compositions, works from his family of artists and writers, and screenplays from prize-winning independent films that he’s helped produce, including the short film 'Real Artists,' which won an Emmy® Award in 2019.

“Our hope is that future travelers who find this capsule will discover some of the richness of our world today,” Dr. Peralta said. “These works on the Moon speak to the idea that, despite wars and pandemics and climate upheaval, humankind found time to dream, time to create art.”

Including the writers in his anthologies, the painters and sculptors in his catalogs, the composers, singers, and screenwriters, Dr. Peralta’s payload manifest represents creative artists from all over the globe, including from Canada, the US, the U.K., Ireland, Belgium, Australia, Sri Lanka, Singapore, and the Philippines.

At a count of 417 writers and artists, Dr. Peralta’s Manifest 9 is the largest payload manifest of the 125 primary author payloads.

The WOTM database is contained in a microSD card and encapsulated in a special DHL MoonBoxTM. Delivery is by Astrobotic’s Peregrine Lunar Lander, through NASA's Commercial Lunar Payload Services (CLPS) program.

Launch is scheduled in July 2021 from Cape Canaveral, Florida on a United Launch Alliance Vulcan Centaur rocket. The lander will touch down in the Lacus Mortis region of the Moon, marking Earth’s return, and the first mission carrying commercial payloads, to the lunar surface.

Physicist, entrepreneur, and storyteller, Samuel Peralta's fiction has hit the Wall Street Journal and USA Today bestseller lists, and his poetry has won awards worldwide, including from the BBC, the UK Poetry Society, and the League of Canadian Poets.

Acclaimed for his bestselling 'Future Chronicles' anthologies, he is also an art curator, an award-winning composer and lyricist, and a producer of prize-winning independent films, including 'The Fencer,' which was nominated for a Golden Globe®, and 'Real Artists,' which won an Emmy® Award.

With a Ph.D. in physics and a business career spanning over thirty years, Samuel continues to be active in Toronto’s high technology scene, serving on the boards of several firms, and mentoring start-up companies at incubators like the University of Toronto’s ICUBE accelerator and through his own firm Incandence.

An archive of his creative work is being sent via NASA and Astrobotic’s Peregrine Mission One on a time capsule on the Moon. Samuel is also currently working with OSUN, an OpenAI machine, on a volume of collaborative human-AI poetry.