“The Green New Deal: Back to the Stone Age?: Are You Ready for Life Altering Changes?” from Christian Faith Publishing author Shane Roberts is a well-argued rebuttal of The Green New Deal and other political policies that threaten to undermine the long-standing systems and schemes of governance that underpin America’s economic, political, and social flourishing. 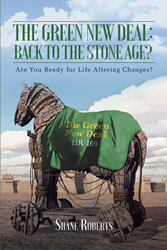 Roberts writes: “We can all agree upon and expect and treasure our rights and liberties we currently enjoy as a world leader, a society that is an example and is even copied by other nations. We do not need a disruptive entity proposing total upheaval such as the Green New Deal of any flavor that seeks to destroy our society for a power grab and a socialist plan of action. We are a strong economy with a functioning government that is a successful republic.”

Far from a brow-beating harangue against the environmentally minded and left-leaning progressivists, Roberts’ book presents an intelligent and highly persuasive rebuttal of each of the Green New Deal’s major points and also prescribes a far more viable, economically sound action plan for America’s future that is far more in keeping with the ideals, ethics, and principles that have made the USA a world leader on both the political and economic stage.

View a synopsis of “The Green New Deal” on YouTube.

Consumers can purchase “The Green New Deal” at traditional brick & mortar bookstores, or online at Amazon.com, Apple iTunes store, or Barnes and Noble.

For additional information or inquiries about “The Green New Deal”, contact the Christian Faith Publishing media department at 866-554-0919.