Author Sonia Sabharwal’s book “Spiritual Genocide: The Reincarnation of Earth” is a thought-provoking spiritual journey probing the pathways between light and darkness

Recent release “Spiritual Genocide: The Reincarnation of Earth” from Page Publishing author Sonia Sabharwal is both a fascinating discussion of human-induced carnage- murder, terrorism, and the like- and the moral imperative of people of all faiths to protect the planet and our present civilization, and an attempt to turn humanity back to the origin of the “supreme source”. 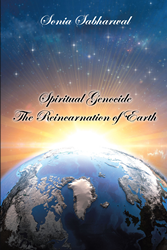 Sonia Sabharwal, a celestially enthused former financial services employee in Manhattan whose spiritual quest led her to change careers to her current employment overseeing the standards and practices of a non-profit organization that provides residential and educational care to children and teenagers with special needs in Rockland County, New York, has completed her new book “Spiritual Genocide: The Reincarnation of Earth”: a mystical exploration of spirituality and the celestial plane.

“‘Spiritual Genocide: Reincarnation of Earth’ encompasses channeled information illustrating Earth’s past history. This history is unfolding today and into the future and is based on a topic in every scripture: ‘Thou Shall Not Kill.’

This book is rich in defining other archetypes with every chapter revealing hidden celestial truths. Every chapter is written as a mystical gate which is stylistically related and adventurous. Every chapter is like a photograph in God’s album surveying the past, present, and the possible future of this unremitting heavenly war and its everlasting effect on Earth and her population.

While some photographs bring joyful memories of Earth being God’s heartbeat, before her separation from him during the heavenly war, some reveal the celestial truth behind the inexplicable mysteries of Earth’s vortices (Mt. Shasta, The Pyramids, Mt. Kailash etc.) and vortexes (Bermuda Triangle, Mohenjo-Daro, Arctic and Antarctic Circles etc.) that continue to baffle scientists, geologists, and many others in their quest for spiritual knowledge.

A spiritual analysis of some of the cataclysmic photographs predicts the possible future of Earth. This could be analogous to Mars or the sunken Lemuria or the Lost Continent of Atlantis; there could either be a new Earth or no Earth at all in the future celestial album. Some historical snapshots describe wretchedness where mass atrocities such as the Holocaust, genocides, wars, world wars, nuclear disasters, abortions, murders, September 11 attacks, etc. show that Earth’s soil is losing its fertility and the quality of its harvest--her inhabitants--is being reduced. They are also subject to devitalization.

Though the mystery of devitalization entails the deciphering of DNA codes, so as to trace the initial reincarnation of Earth and the human soul, the book’s chapters will unlock the key mystery that the cosmos (including Earth, planets, and extraterrestrials) has reincarnated numerous times and is reincarnating as per its karmic activity for spiritual ascension. Based on the current threat of nuclear disaster and mass atrocities (including shootings) that are closing the traditional doors of churches, temples, and synagogues, these photographs will reveal the possibility that the celestial windows for Earth and her inhabitants are closing with no doors to escape.

Are the current meteorological changes depicting that when one wants to plant a garden, the soil has to be rich in order for the new crops to grow? This book will reveal that if the quality of the Earth and soil is diminished, because of mass atrocities that have occurred since Earth’s inception and the effects of present nuclear threats, the crops may not grow.

‘The Spiritual Genocide: Reincarnation of Earth’ captures the essence of the author’s beliefs and further explains the mysteries of the universe. For thousands of years humans have been destroying Earth. This divinely inspired book is the truth about man’s veiled secrets--the denial of their own soul truth and the attempt to unconsciously place fault on other human beings for their karma. This is an awakening of truth that each soul is responsible for in their ascension with God. This spiritual book is a spiritual initiation for entering into God’s heart and pure love. It is a spiritual initiation of the birthing of dreams for believers and non-believers of faith. This book is guidance for everyone, as we all have sorrows and tragedies that been felt for centuries on Earth. It provides a link to all souls existing today. The author hopes that ‘Spiritual Genocide-Reincarnation of Earth’ is a resource for all souls who are lost and forgotten. Hope this book provides them hope, joy and inspiration.”

Published by Page Publishing, Sonia Sabharwal’s engrossing book is an excellent choice for readers with a deep interest in spirituality.

Readers who wish to experience this engaging work can purchase “Spiritual Genocide: The Reincarnation of Earth” at bookstores everywhere, or online at the Apple iTunes Store, Amazon, Google Play, or Barnes and Noble.