Author Stanley M. Bonner’s new book “Whispers and Screams” is a collection of seventeen gripping tales of woe from the realms of fantasy, horror, and science fiction. 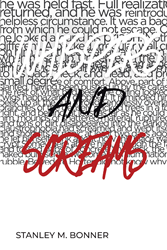 Seventeen short stories and novelettes compose “Whispers and Screams”. While these stories are from the realms of horror, science fiction, and fantasy, they are also stories about people, about loneliness, insanity, love, politics, philosophy, food, power, about human feelings and behavior in these dynamic times. A large number of the protagonists are minorities or women. Many of the stories owe their heritage to the black-and-white horror movies of the late thirties and forties and the B-grade science fiction of the fifties.

“Proteus Rex” is about a genetically engineered life-form that adapts the attributes of animals (a lion’s strength, a bird’s wings) or whatever his survival needs and infinite appetites dictate. Having consumed all the animal life in a small rural community, he begins to eat people. Much of the story is about the local authority’s attempt to identify and apprehend this menace, a significant challenge as Proteus Rex is an extradimensional being that can change his size to as small as an amoeba to as large as a blue whale. “Proteus Rex” is populated by a deep cast of characters, only a few of whom manage not to get eaten.

Imagine the actress Lucy Liu portraying Ian Fleming’s most shrewd creation, James Bond, 007. Only she’s working for TSA—the Teleportation Security Administration—three hundred years in the future. This is after World War VI, and the United States has been fractured into several independent nations. The two Koreas have united and is running the world. Executive Action Officer Sun Park’s mission is to capture or neutralize the perpetrators that sent and detonated an atomic bomb in the TSA X-port Freight Hub in Buenos Aires. This is the premise of “The Price of a Dog,” an action-driven novella, a political science fiction thriller.

In the short story “Slaves of the Cat Goddess,” Buster, the main character (and stooge of General Wanamaker), is charged to take the mysterious cat Bast to a secret research base. Bast’s size and ferocity force a crash landing on an uncharted tropical island inhabited by cannibals. Knowing that it was Buster who was responsible for her mutation, Bast not only protects him in this hostile world, but she sees that he is elevated, serving as the ambassador between the goddess Bast and the humanity she would enslave.

Readers who wish to experience this engaging work can purchase “Whispers and Screams” at bookstores everywhere, or online at the Apple iTunes store, Amazon, Google Play, or Barnes and Noble.