Author Stephanie Honeycutt’s new book “Steps for Tomorrow: The Omega Chronicles” is a riveting adventure on an uncharted island inhabited by survivors of a plane crash.

Recent release “Steps for Tomorrow: The Omega Chronicles” from Page Publishing author Stephanie Honeycutt is a gripping tale of friendship, camaraderie, and survival for a group of people stranded on a remote Pacific island after their plane went down. Members if an ultra-elite force fleeing US military control use their extraordinary skills to save Jane, one of their fellow “islanders” whose injury poses a dire risk to her life- and their freedom. 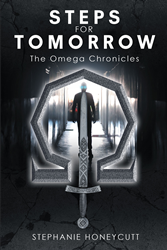 Stephanie Honeycutt, an engineering systems manager who lives in Texas with her family and their two dogs, has published her latest book “Steps for Tomorrow: The Omega Chronicles”: a fast-paced and suspenseful debut novel with intriguing characters and an engaging plot that keeps the pages turning until the satisfying conclusion.

When Master Sergeant Eliot Carter and Delta Force Team Omega had fled the United States, he had no idea their plane would go down in the middle of the Pacific Ocean. He had no idea the woman who saved them would spend the next fourteen months weaseling her way onto the team. Being the only human to ever really accept Omega, Jane had become family. With no memory and seizures that were like a timer on her life, the team had taken on the very real mission of saving her. However, there was nothing they could do on the island, and they still had to keep their secret.

As the ship grew in the distance, promising hope and dishing out happiness to everyone around him, he only felt a strange sadness. Yes, Jane would finally be able to get the help she needed, but Omega would have to flee again. Arrow would never stop hunting them. When the ship finally landed, it became clear the island was the last vestige of paradise for any of them. What lurked inside that ship had changed the world, and they had a new enemy. Or 6.7 billion of them.

With no idea how bad the world had become and with Jane’s seizures showing how little time she had left, they had no choice but to sail right into hell. Being late to the end of the world, would Omega’s secret make a difference in the fight for humanity?
Published by Page Publishing, Stephanie Honeycutt’s engrossing book is an action-packed and entertaining choice for fantasy fiction readers.
Readers who wish to experience this entertaining work can purchase“Steps for Tomorrow: The Omega Chronicles” at bookstores everywhere, or online at the Apple iTunes store, Amazon, Google Play, or Barnes and Noble.