Author Stephen Oram’s newly released “The Gospels of Edward” is a thrilling Christian fiction novel about the Second Coming of Christ.

“The Gospels of Edward” from Christian Faith Publishing author Stephen Oram is a gripping tale about the Second Coming of Christ and one man’s mission to lead the Earth’s people back to God. 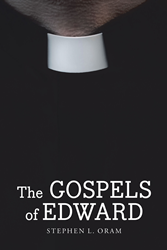 “The Gospels of Edward”: a gripping and enthralling tale about the son of God’s battle against the Devil to save the hearts and souls of all of God’s children. “The Gospels of Edward” is the creation of published author, Stephen Oram, a former member of the US Navy who worked in procurement for The Rockefeller University in Manhattan for twenty years.

Oram writes: “Some of the deadliest weather phenomena ever recorded due to human-induced climate change plague earth. Diseases once thought to be eradicated suddenly resurface. Greed causes economic pillars to crumble, resulting in global unemployment. Disobedience to God’s gospels obliterates wholesome values. Religious zealots around the world are proclaiming the end is near. They predict that Jesus Christ’s second coming is imminent. With one evil exception, no one knows that Jesus has been among them again for forty years.”

Published by Christian Faith Publishing, Stephen Oram’s new book is the tale of a northern-Californian pastor thrust from the daily struggle to keep his ministry afloat into a spiritual tug of war with Satan himself for the hearts and souls of all of Earth’s inhabitants.

Fast-paced and engaging throughout, this tale is also one that calls its readers to question the ways of the modern world and what part they themselves may play in its steady estrangement from the values and ethics most conducive to human flourishing and righteous living.

View a synopsis of “The Gospels of Edward” on YouTube.

Consumers can purchase “The Gospels of Edward” at traditional brick & mortar bookstores, or online at Amazon.com, Apple iTunes store, or Barnes and Noble.

For additional information or inquiries about “The Gospels of Edward”, contact the Christian Faith Publishing media department at 866-554-0919.