Author Stephen Thompson’s New Book “The Construction of the U.S.S. Monitor” Is a Fascinating Account of the Genesis of the First Ironclad Warship in the US Navy

Recent release “The Construction of the U.S.S. Monitor” from Page Publishing author Stephen Thompson is a well-researched and compelling discussion of the urgent reasons behind the commission of the groundbreaking vessel, the innovative design decisions, and the administrative details of the ambitious project. 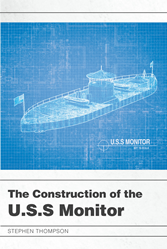 Stephen Thompson, a lifelong Virginian and forty-one-year employee in the rigging department at Newport News Shipbuilding, has completed his new book “The Construction of the U.S.S. Monitor”: a thorough examination of a naval game-changer in the Civil War.

In the centuries preceding the American Civil War, the large wooden sailing ship was the mainstay of the world’s navies. Then, in the spring of 1861, Stephen Mallory, secretary of the Navy of the Confederate States of America, issued a challenge to the United States Navy: the South was going to fight the numerically superior wooden Navy of the US in ironclad ships. The Union responded to the challenge with its own ironclad, the Monitor, but the South had the advantage of an earlier start.

The Merrimac was designed and built to fight wooden ships; the Monitor was created to fight the Merrimac. The US Navy’s urgent need for an ironclad led a naval review board to accept the proposed design of the Monitor after initially having rejected it. Manuscripts reveal how the board examined and turned down several proposals; they also describe how the Monitor’s designer defended her against skeptics and how the construction of the vessel was organized and undertaken.

The book describes the formation of a cartel of northeastern iron and shipbuilding industries that sought to monopolize the construction of blue-water ironclads. This investigation of the origin of the Monitor departs from earlier studies by focusing on the construction companies rather than on Ericsson and his most visible partners.

The construction of the Monitor has never been thoroughly investigated. Most of the literature on the Monitor focuses either on Ericsson and his associates or on the dramatic meeting of the Monitor and the Merrimac; it generally ignores the actual building of the vessel. The few attempts to describe her construction contain numerous errors particularly with respect to the operation of her innovative turret.

Readers who wish to experience this enlightening work can purchase “The Construction of the U.S.S. Monitor” at bookstores everywhere, or online at the Apple iTunes store, Amazon, Google Play, or Barnes and Noble.