Author Steve Malone’s new book “The Epiphany of Harlan Hoyt” is a riveting thriller weaving a David-and-Goliath confrontation between unlimited power and truth.

Recent release “The Epiphany of Harlan Hoyt” from Page Publishing author Steve Malone is a gripping and potent work of political fiction pitting a small group of patriots against the powerful elites using every tool at their disposal to take down a Navy captain to serve their nefarious political agendas. 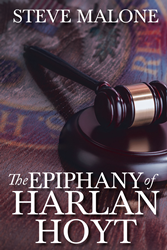 Steve Malone is a father, grandfather, avid outdoorsman, and Minnesota native whose life experiences include a stint in the US Navy, a sales career with a territory stretching from Honolulu to London and Duluth to Mexico City, and volunteer baseball and basketball coach. He has completed his new book “The Epiphany of Harlan Hoyt”: a fast-paced and compelling story of honor, patriotism, and the extraordinary will of ordinary people to stand up to the evils of unchecked power.

Steve writes, “Navy Captain Pat Kelly was the target for Allan Warren, the world’s most popular news anchor; James Warren, the most powerful and ruthless man in the history of the US Congress; and Jennifer Warren, billionaire heiress, who could buy any credibility they needed. Their motives were personal. The opportunity was an espionage scandal at the Office of Naval Intelligence. A televised congressional hearing became a kangaroo court where Kelly’s guilt was broadcast in a series of deliberate news leaks designed to roil the nation into righteous anger. They twisted his past to fit the narrative. A tiny group of men and women Pat had helped in his life tried to intercede in this David-versus-Goliath struggle. This was a story in which average citizens, doing their best, clashed with the world’s most powerful leaders who had unlimited appetites for more power. What will happen if the target decides to fight back, come what may, with little chance to win or even survive?”

Readers who wish to experience this engaging work can purchase “The Epiphany of Harlan Hoyt” at bookstores everywhere, or online at the Apple iTunes store, Amazon, Google Play, or Barnes and Noble.