Author Steven Koutz’s new book “Shadowed Stars” is a griping and potent intergalactic thriller pitting the human race against some of the darkest forces in the universe.

Recent release “Shadowed Stars” from Page Publishing author Steven Koutz is a futuristic fantasy and the first in an exciting series of sci-fi adventures in which the survival of humanity is far from guaranteed. 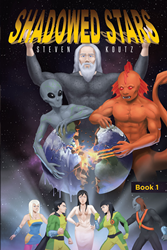 Steven Koutz is an avid science fiction writer from St. Paul, Minnesota who enjoys collecting comic books, action figures, busts, and trading cards, as well as playing a variety of trading card games, miniature games, role-playing games, and elaborate board games. He has published his new book “Shadowed Stars”: a spellbinding interplanetary saga that keeps the pages turning until its dramatic conclusion.

In the year 2089, Earth had experienced a rapid shift in political and technological developments. Reported sightings of UFOs and alleged human abductions had reached such an alarming rate that governments decided to remove national boundaries and unite as one planet under one leader. The new government, the United Nations of Earth, made space exploration and defense of the planet its top priority.

Journeyer was one of the first ships sent into space to find new discoveries and above all the search for sentient/intelligent life and to open peaceful negotiations. Prior to its recall and decommission, Journeyer was captured by the Ubides, an alien race of the highest intellect and an ally of the Derths, a carnivorous alien race with ever expanding territory. The Journeyer’s captain, Drew Cage, was forcibly taken for a reason. Meanwhile other crew members, like Eva Cusping and Enrico Dalchez, sent to a planet to restore lost communication satellites will be caught between warring kingdoms. Captain Drew Cage and Eva Cusping will learn something about themselves that will make them question their existence and their beliefs, leading one to anger and rage while giving the other enlightenment. Both will undergo a transformation that will set them on course to good and evil in an intergalactic war where the survival of the human race and other life-forms is no guarantee. They will encounter allies and enemies as they realize some questions you may not always want answered: (1) Are we alone in the universe? (2) Is there a god? (3) What does the future hold?

Do you really want to know?

Readers who wish to experience this engaging work can purchase “Shadowed Stars” at bookstores everywhere, or online at the Apple iTunes store, Amazon, Google Play, or Barnes and Noble. There is also more at shadowedstarsbooks.com with short stories and other works.