Recent release “Thugness” from Page Publishing author Sumer Tyme is a compelling story introducing a professional woman just easing back into the dating when she meets Christian, an irresistible man with a past. She ultimately moves to a committed relationship with Shawn, and plans a trip to the altar; will her heart ever get over the one who got away? 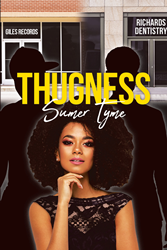 Sumer Tyme is a pre-school teacher and a single mom of two boys ages seven and ten who earned a bachelor’s degree in psychology from Albany State University and has worked in a variety of professions including customer service, education, and in a group home for girls with behavior problems. She has published her new book “Thugness”: a spellbinding and modern romantic drama.

When Tracy—a successful singles and couples’ counselor—turned thirty, she decided that she was ready to settle down. Tracy had not dated since her early college days. She took time to focus on her career. One day, she saw this dark skin, six-foot-tall guy walk into Pierre’s. He had all the makings of a thug. On a chance encounter a few days later, the two would meet. Christian Giles was an up-and-coming music producer from a different side of town than Tracy. Since he had thug qualities, Tracy named him Thugness. From there, they entered into a relationship filled with love, compassion, and understanding—a love that reminded her of the love her dad had always shown her. The relationship was going well until Chris’s past came back to haunt him. Tracy and Christian ended their relationship.

A heartbroken Tracy didn’t want to deal with the memories of her and Christian’s relationship, so she moved to a new house and a new office. Across the hall worked a money-worshipping six-foot-two, brown-skinned dentist with a million-dollar smile named Dr. Shawn Richards. Their first meeting was something that Tracy wanted to forget, but Shawn was able to woo her into a relationship. As months went by, Shawn asked Tracy to marry him. Tracy said yes.

A month before the wedding, while at the mall, Tracy saw a familiar face. One she hadn’t seen in a few years. She soon realized that it was Thugness. She told him she was getting married and walked away.

On the wedding day, as her dad walked her down the aisle, Tracy was all set to marry Shawn. He stood at the front of the tree house, awaiting her arrival. With her hand in his, the officiant asked if anyone knew why the two should not be married. Tracy was surprised to see Thugness standing in front of her.

Tracy must now choose between the love she never got over, or the love that she was unsure of. Whom would she choose?

Readers who wish to experience this engaging work can purchase “Thugness” at bookstores everywhere, or online at the Apple iTunes store, Amazon, Google Play, or Barnes and Noble.