Recent release “The German Texans” from Page Publishing author Susan Francis Buchholz is a fascinating and well-research account of the history of German immigration into the Republic of Texas starting in 1840, providing details of life for these immigrants, new and assimilated. 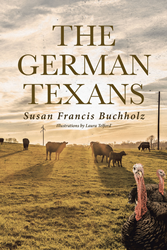 Susan Francis Buchholz, who lives on a remote West Texas cattle ranch and spends her days observing nature, has completed her new book “The German Texans”: a gripping and potent account of the lives of German immigrants and their descendants in Texas.

Susan Francis Buchholz prefaces this story by writing, “By the early 1840s, several thousand Germans had survived the eight- to twelve-week voyages across the Atlantic to new homes in the Republic of Texas. They came predominantly from provinces in northern Germany.

“German interest in Texas entered a new phase in 1842 when an assembly of five sovereign princes and six noblemen convened at Biebrich on the Rhine and formed a society to promote German colonization in Texas. This poorly organized, uninformed, and badly underfinanced organization was known as the Adelsverein.

“The first colonists sponsored by the Adelsverein landed at Galveston and then sailed to Indianola in 1844. The records of the German Immigration Company in the General Land Office in Austin indicate that most of these settlers were from the provinces of western and northwestern Germany. Despite the great misery of the first two years, the Adelsverein brought nearly 7,400 German immigrants to Texas between 1844 and 1847. As the massive migration gained momentum from then until 1860, approximately twenty thousand more Germans moved to Texas.”

Published by Page Publishing, Susan Francis Buchholz’s intriguing tale tells stories of German immigrants in Texas, specifically the author’s ancestors, including various tenderly drawn illustrations visualizing the stories. These snippets of the lives of German immigrants provides a fascinating picture of their lives in Texas from the late 1800s to well into the 1900s, as their experiences are shaped by their ancestry. Included at the end of this book is a collection of recipes for traditional German-Texan meals, completing the snapshot of German immigration’s influence on Texas.

Readers who wish to experience this potent work can purchase “The German Texans” at bookstores everywhere, or online at the Apple iTunes Store, Amazon, Google Play, or Barnes and Noble.