Author Takes No Prisoners in his 'Publishing Circus' Expose 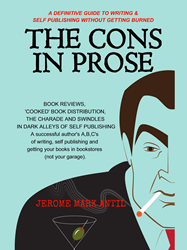 Jerome Mark Antil encourages, suggests but cautions writers with this definitive book on the world of getting published.

"You want to self publish? Get out your checkbook; get a crying towel and if they’re any guns in the house, hide them. Even Hemingway blew his brains out - and he had a publisher."

Author of twelve self published books - contender in several Book of the Year Winner's Circles - Antil was fed up with the avalanche of greed and avarice of vultures from virtually every alley in publishing. "They hold 'self publishing' in total disdain," said Antil. "They treat us like we're a bar fly and trick us into making needless but expensive investments while playing on our ego."

Antil, whose earlier career included writing for marketing and training programs offers cogent step by step advice on getting your book finished and into stores at minimal cost - and the novelist in him has a bit of fun while doing it.

"My advice?" his book - THE CONS IN PROS begins. "Make copies and send it to all your Holiday mailing list and be done with it. Oh, you want it published? Get out your checkbook; get a crying towel and if they’re any guns in the house, hide them. Even Hemingway blew his brains out."

Antil pulls no punches, makes no promises. The author of 12 self published books shows how to get it done. "Along the way, I lift lids of every aspect of publishing just to smell the garbage. The stench could save the self publisher from costly mistakes I made along the way."

(Excerpt from THE CONS IN PROSE.)

"Fact:
Mark Twain’s Tom Sawyer and Adventures of Huckleberry Finn were both self-published and they were flops. Twain earned his money from speaking not writing. It wasn’t until Mark Twain hired straight commissioned salespeople in every state to go knock on door after door and sell a weekly subscription of a chapter a week and collect for it weekly that he began to get a reader following and publishing began to pay off for him. They had no radio to listen to…they had no television…they had his serialized chapter each and every week. By the way, Mark Twain didn’t write Huck Finn in Hannibal Missouri - he lived in Elmyra, in upstate New York at the time and typed it on a Remington typewriter.

Fact:
F. Scott Fitzgerald’s author royalties for The Great Gatsby was less than $3 for the first three years.

Fact:
50 Shades of Gray by E.L. James started out as an eBook – costing her maybe $95 to publish and has sold more than 125 million copies."

Antil believes James Daunt, the new and permanent Barnes & Noble CEO will level the playing field for 'good reads' regardless of writer bloodlines and publisher pedigree and save the book industry.