Recent release “The American Cowboy Chronicles” from Page Publishing author Thomas Correa is the culmination of years of research on how the west was really won. 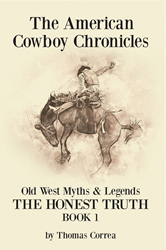 Thomas Correa, a Vietnam War veteran whose passion to better understand 19th century America was fed by travels across the country upon his return from service, has completed his new book “The American Cowboy Chronicles Old West Myth & Legends: The Honest Truth”: a deep-dive examination of the characters in various media whose names and deeds have acquired mythical status in American culture.

“This work comes from what I’ve found during more than forty-five years of researching American history, but especially what I’ve learned in regards to the other side of the myths and legends of the Old West,” Thomas Correa said of his book. “My book looks at why the American Cowboy represents American toughness, independence, and resilience to the rest of the World.”

Published by Page Publishing, Thomas Correa’s fact-packed book comes out of the blog by the same name started as a pet project in 2010. As the author gathered more knowledge and dug deeper than the tall tales passed on through various media, Correa was sometimes confronted with hard, less-than-flattering truths about American legends.

“My [blog posts] on the Old West [were] never meant to dispel the myths, or attack legends, but to simply explain what I’ve found after taking a hard look—an honest, objective look—at the evidence that’s available,” Correa explained. “Since evidence proves or disproves what we’ve all been told about the Old West by Hollywood and writers who are not objective researchers, this is my attempt at taking a fresh look at Wyatt Earp, Tom Horn, and others.”

Readers who wish to learn more about why the author believes the American Cowboy became “America’s quintessential role model” can purchase “The American Cowboy Chronicles Old West Myth & Legends: The Honest Truth” at bookstores everywhere, or online at the Apple iTunes Store, Amazon, Google Play, or Barnes and Noble.