Recent release “Killer in the Dusk” from Page Publishing author Tim Sweetsir is a gripping and suspenseful murder mystery charting the course of a brutal killer terrorizing various small towns across New England. Follow the detectives’ investigation as they erroneously suspect an ultimately innocent man while the true killer taunts them from his shocking murder scenes. 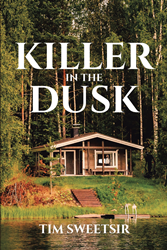 Tim Sweetsir is a US military veteran and retired law enforcement officer who served throughout New England and Europe and now lives in central New Hampshire with Debra, his wife of thirty years, and his three sons. He has published his latest book “Killer in the Dusk”: a fast-paced and compelling literary debut.

Tim writes, “In a small little town bordering Vermont, an extremely violent man, Cameron Baker, starts his hunt. He is looking for his estranged wife, Kayla Cerone, and son who are on the run. She ran from him with her son to get away from the abuse that she had endured for the better part of five years.

Cameron is ruthless and does not care whom he hurts or how he hurts them. He wants no witnesses left behind who can identify him. He is fixated with finding his ex-wife and son. Once found, he will make her regret her decision to leave him and make an example of her.

He chooses his victims carefully as he makes his way through several states, leaving a trail of death and violence that baffles the local police, state police, and the FBI. Law enforcement vows to get the killer off the streets and behind bars, but they make a few mistakes in their investigation when they jump to conclusions too quickly. He’s bold and leaves a note behind on one of his victims. Cameron makes fools out of the police.

He hides out on a private island. After meeting its residents, he decides to use them as pawns to lure his ex-wife to the island. His threats are taken seriously.

But even Cameron can be careless, and his last victim just might have cost him his freedom or his life. Does he kill one too many for the thrill of killing before he is caught?”
Published by Page Publishing, Tim Sweetsir’s engrossing book is a must-read for fans of detective fiction.
Readers who wish to experience this engaging work can purchase “Killer in the Dusk” at bookstores everywhere, or online at the Apple iTunes store, Amazon, Google Play, or Barnes and Noble.