Recent release “A Fractured Past” from Page Publishing author Tony Holland is a deeply personal reflection on the challenges of life as a closeted gay man of color in Atlanta in the waning decades of the twentieth century. 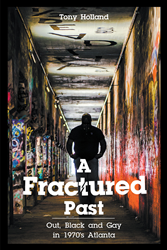 Tony Holland, an Atlanta native with a lifelong passion for reading, art, and sewing who makes his living in the clothing design field, has published his new book “A Fractured Past”: a poignant intersection of race, religion, and sexuality in a large Bible Belt city.

The author writes, “Atlanta, Georgia, 1960s and 1970s—a city that was the focal point of growth in the Southeastern United States that then, just as today, was saddled with trying to grow into a world-class city while attempting to minimize or even hide its shameful undercurrent of racism, sexism, classism, and overall prejudice. It was, and is, a very conservative place at its core.

In the early days in Atlanta, when I was growing up, the African American community definitely felt it had something to prove. What with being the centerpiece of the civil rights movement, the community recognized that this was an opportunity for its black citizens to make a true stand for an independence and growth that was denied elsewhere in our nation as a whole.

We were onstage, and the entire nation knew it. To that end, the church played a very big part in the development of the community.

From my first realization that I had same-sex interests, there was no doubt that to disclose that fact with anyone would at the very least cause me to be ostracized. The pain and conflict that this caused me was nearly unbearable and was the catalyst that gave direction to much of my life from puberty on.

Much has been written about this period in Atlanta from the racial angle. There has also been a great deal written about the early years of gay liberation in Atlanta; however, I’ve never encountered writings that adequately equated or depicted the relationship of both.

In this book, I will attempt to give one man’s account of what it was really like trying to straddle both worlds and keep them from crashing into each other, for I was sure that were that to happen, it would have guaranteed my personal destruction.

Ironically, what I found was that danger to me existed in both communities. Though coming from different directions, in many ways, the dangers were very similar.”

Readers who wish to experience this engaging work can purchase “A Fractured Past” at bookstores everywhere, or online at the Apple iTunes store, Amazon, Google Play, or Barnes and Noble.