Recent release “Cold Steel Seoul” from Page Publishing author Turk Van Buren is a gripping and potent drama using the 2018 Winter Olympics as the starting point for a break in the tense peace at the DMZ and a terrifying return into armed hostilities in the twenty-first century. Rich in cultural and military detail gleaned from the author’s military experience, this suspenseful tale keeps the pages turning until the stunning conclusion. 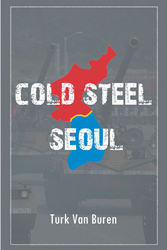 Turk Van Buren is a Colorado native, US military veteran who deployed to Iraq, Afghanistan (twice), and South Korea over the course of nine years of active duty, cybersecurity expert, and married father of two currently pursuing his second advanced degree. He has published his latest book “Cold Steel Seoul”: an action-packed work of military fiction.

Turk writes, “In the winter of 2018, the world braced as continued North Korean missile launches over the Korean Peninsula had deteriorated and cooled diplomatic efforts between the United States and the Democratic Republic of North Korea (DPRK). Now, in hindsight, most of the Pentagon’s top brass freely admit real-world executive orders to transport military families living in South Korea at the time of volatility were at least somewhat warranted. Ultimately, the 2018 Winter Olympics in PyeongChang just a few miles from the thirty-eighth parallel, also known as the DMZ, remained dormant and free from conflict.

‘Cold Steel Seoul’ is the one and only book in existence that begs the question, ‘what if things in 2018 and beyond did not remain quiet, and a resurgence in the United States’ longest-running war reached critical mass?’ The book you have in your hands takes an extreme fictional approach to choreograph and examine what a break in the armistice would mean not only to the twenty-eight thousand military personnel currently stationed in South Korea, but also the world.

In the end, most East Asian scholars and academics can agree on only a handful of facets of North Korea. The country is starving, the regime is totalitarian, and from an intelligence perspective we really know diddly-squat about what happens inside the DPRK. For instance, if a breakaway splinter cell of a deadly terrorist organization named Aum Shinrikyo were to infect the highest levels of the regime would we really know until it was too late? Buckle up and hang on tight as the 2018 Winter Olympic Games just went from being a snooze fest and ignored speed bump in localized history to the most explosive and important events in human history. The breaths of a revolution are at hand, and the second Korean War might just be around the corner. ‘America loves a winner, and will not tolerate a loser, this is why America has never, and will never, lose a war’ (General George S. Patton).”
Published by Page Publishing, Turk Van Buren’s engrossing book is a fast-paced and compelling geopolitical thriller for mature readers.
Readers who wish to experience this engaging work can purchase “Cold Steel Seoul” at bookstores everywhere, or online at the Apple iTunes store, Amazon, Google Play, or Barnes and Noble.