Recent release “The Cop and the Stalker: Based on a True Story and Actual Events” from Page Publishing author Vincent Davis is an autobiographical reflection on a storied law enforcement career and the dangerous life law enforcement officers on the trail of a killer in New York City. 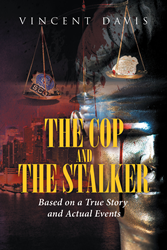 Vincent Davis is a highly decorated New York City police officer who has patrolled in some of the most dangerous Bronx neighborhoods. He has published his latest book “The Cop and the Stalker: Based on a True Story and Actual Events”: a candid and spellbinding account of the real investigation of a psychopathic killer.

“The Cop and the Stalker” is a true story of what happened when a highly decorated New York City cop and a career criminal are put on a collision course with the help of US Customs and an overzealous federal prosecutor. It is also a story of raw courage and the friendship of two youths growing up in Yonkers, New York. Vinny Davis worked as a plainclothes cop in the highest crime neighborhoods of the Bronx in the eighties and nineties. He would stop at nothing to put the bad guys behind bars.

Richie Sabol was a malevolent psychopath and career criminal who preyed on the weak. His first trip to state prison was for armed robbery, but when he was paroled, he was more violent than before. He had moved on to beating people with baseball bats and shooting a drug dealer in the head while robbing him. His crime spree ranged up and down the East Coast until he sold two kilos of coke and got sentenced to twenty years in federal prison. Two years later, he’s back on the streets of New York. He’s now working for the feds with the promise he can deliver the Lucchese crime family on a silver platter. And the justice department will do and say anything to ensure that he keeps his word at any cost.

Published by Page Publishing, Vincent Davis’s engrossing book is a compelling and all-too-real crime drama that unfolded on the streets of New York City in the waning years of the twentieth century.

Readers who wish to experience this engaging work can purchase “The Cop and the Stalker: Based on a True Story and Actual Events” at bookstores everywhere, or online at the Apple iTunes store, Amazon, Google Play, or Barnes and Noble.