Recent release “Fruits of the Poisonous Tree” from Page Publishing author Wade Bey is a searing novel following the lives of two young brothers whose drug-addicted parents go far beyond neglect into the realm of horrific abuse and propel their sons into lives of crime and violence. They rise to the top of a notorious Chicago drug gang and find their lives constantly tested by conflict, betrayal, and a thirst for vengeance. 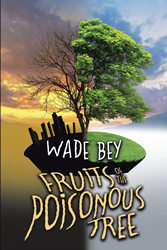 Wade Bey is a Chicago native and former gang member who survived several attempts on his life, a decade of incarceration in a federal penitentiary before landing a job in the oil industry and devoting his efforts to helping others avoid the same pitfalls in their own lives. He has published his new book “Fruits of the Poisonous Tree”: a compelling story that shines an unsparing light on the entrenched conditions in impoverished neighborhoods and their devastating effects on the children who grow up surrounded by crime, drugs, and hopelessness.

In 1987, Chicago’s street gangs were highly organized, and the Ida B. Wells housing projects were one of the most dangerous in the nation. Two brothers, Carl and Tommy, were born into a world of hell and chaos, fighting every day to survive living with drug-addicted parents. A child’s innocence was a small price to pay in order to secure the next fix. Abandoned by their mother after their father’s incarceration, they turned to their friend Lucky and joined the Gangster Disciples.

After years of them learning life’s lessons in the streets, their father is released from prison a born-again Christian. Carl finds it in his heart to forgive him; however, Tommy, a psychopathic killer, wants revenge in the worst way. To add to the chaos, the brothers are caught in the middle of a Gangster Disciple and Black Disciple gang war.

The Black Disciples win the war, and Lucky flips to join the opposing gang, led by King Neal. He quickly rises to the top of the lucrative drug trade in the Ida B. Wells housing projects. Events quickly unfold into a bloody fight for survival as Lucky’s list of adversaries continues to grow, with his childhood friend being at the top.

Published by Page Publishing, Wade Bey’s engrossing book is a potent cautionary tale that keeps the pages turning until the provocative conclusion.

Readers who wish to experience this dramatic work can purchase “Fruits of the Poisonous Tree” at bookstores everywhere, or online at the Apple iTunes store, Amazon, Google Play, or Barnes and Noble.