Recent release “The Sins of Father Joe” from Page Publishing author Walter Beevers is a riveting novel introducing Joseph Cobb, a Roman Catholic priest whose service in both the police department and in the military have instilled an unshakeable sense of the righteousness of his sometimes harsh methods, even as be battles the demons of Post-Traumatic Stress Disorder. When he discovers that the neighborhood surrounding his new parish is besieged by a violent turf war between two rival gangs, he vows to eradicate the threat to innocent lives by any means necessary. 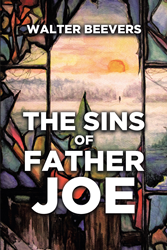 Walter Beevers is a longtime high school English teacher in the suburbs west of Boston who went on to supervise aspiring teachers at Brandeis University and now lives in retirement with his wife on Cape Cod. He has published his new book “The Sins of Father Joe”: a spellbinding drama that keeps the pages turning until the stunning conclusion.

Joe Cobb grew up in Boston’s North End. After graduating from Northeastern University with a degree in criminal justice, Joe joined the Cambridge Police Department and was known among the criminal element as the cop without mercy because of his strict interpretation of the law.

After a few years of arresting bad guys, mostly young, he quit and told his chief he wasn’t good as a cop because too many of the oﬀenders he arrested returned to crime. Joe decided to become a priest in hopes of getting to the oﬀenders before they turned to crime.

After ordination, Joe enlisted in the US Army, became a chaplain, and was sent to war in Afghanistan, where his life was blown apart.

Joe’s medical discharge said he was suffering from PTSD, but his problems were bigger than traumatic stress. Father Joe returned from war with the conviction that he had been chosen by God to correct wrong wherever he found it.

Father Joe took his mission seriously and quickly discovered that the parish he was assigned to in Dorchester sat in the middle of a poor neighborhood that was under attack by two competing gangs that were slowly killing the kids with cheap, dirty drugs.
Father Joe declared war, and the battles began.
Published by Page Publishing, Walter Beevers’s engrossing book is an excellent choice for avid crime fiction readers.
Readers who wish to experience this powerful work can purchase“The Sins of Father Joe” at bookstores everywhere, or online at the Apple iTunes store, Amazon, Google Play, or Barnes and Noble.