Recent release “The Paradise of the Parrot” from Page Publishing author Will Palfrey is a personal memoir of an enjoyable trip to the beautiful Caribbean island of Dominica while his son attended medical school there. 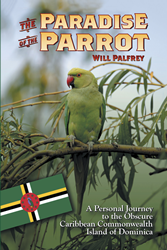 Will Palfrey is a retired Air Force logistics officer who won three Meritorious Service Medals, flew as combat crew on an EC-135 Strategic Airborne Command Post, served on the USAF inspector general staff, and was able to fly once in an F-16B Fighting Falcon jet fighter. He is now working as a defense industry logistician for an Army program at Redstone Arsenal in Huntsville, Alabama and has published his new book “The Paradise of the Parrot”: a detailed travel journal recalling his experiences on an unspoiled Caribbean island.

Author Will Palfrey is an experienced traveler, having lived in Europe for eight years and traveled to forty-six countries and forty-five US states. Several years ago, his son Taylor, a University of Notre Dame pre-med graduate, attended Ross U School of Medicine on the Caribbean island of Dominica. Upon hearing his son’s stories about life on the island, Will decided to go see for himself what Dominica was all about. The book is an easy-reading chronicle of a father’s four-day travels and experiences visiting his son throughout this picturesque and fascinating island of ecotourism. The book describes his trip to, and sightseeing adventures around, this beautiful island. Dominica, a very obscure and generally unknown island, is not on any main tourist maps or itineraries, and requires grit and determination to simply get to. Even after arrival, the level of effort required for even the most intrepid traveler to travel about and sightsee is challenging, yet evidently quite rewarding.

In this short book, Will details many of his varied sightseeing experiences, from enjoying local cuisine at one of the few big restaurants on the island, to tasting and enjoying locally brewed beer. He also describes in detail the adventures of traveling to, and sightseeing at, some of the points of interest on Dominica: the capital city of Roseau, the landmass called Scott’s Head which separates the Atlantic Ocean from the Caribbean Sea, Cabrits National Park where the old British fort from the late 1700s to early 1800s was located and which was involved with protecting the slave trade, to many other experiences too numerous to describe here. He also provides some general background on the island: maps and a few appendices in which he describes Dominica’s Coat of Arms, its flag, and insights into its history and politics. Will Palfrey’s description of his time there harkens the reader back to the days before cell phones and the internet, when traveling abroad was an adventure with a lot of unknowns lurking. In short: a much more leisurely process when compared to today’s expectation of immediate responses to queries and questions via technology such as smart phones. As those who have experienced visiting the Hawaiian Islands and are familiar with the phrase/meaning of “island time,” the same applies to Dominica. In summary, you won’t be disappointed in the simplicity of experiencing life on the Caribbean island of Dominica through the eyes of a father visiting his son, of whom he is extremely proud, with cause.

Published by Page Publishing, Will Palfrey’s engrossing book is a must-read for anyone interested in exploring a little-known tropical paradise where the Caribbean Sea meets the Atlantic.

Readers who wish to experience this engaging work can purchase “The Paradise of the Parrot” at bookstores everywhere, or online at the Apple iTunes store, Amazon, Google Play, or Barnes and Noble.