Author William J. Switala’s new book “The Quest for God” is a study of the renewal of spirituality in twelfth-century Europe among Christians, Jews, and Muslims

Recent release “The Quest for God” from Page Publishing author William J. Switala is a fascinating discussion of each of the three major faith systems to see how they reacted to the external and internal pressures exerted on them in the twelfth century. In addition, this work explores the responses produced by the religions to cope with these pressures in an attempt to renew the spiritual direction fostered by each of their doctrines. 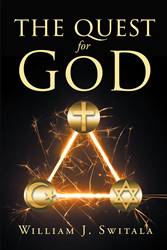 William J. Switala is a career educator and former seminarian with an extensive background in Church history, scripture, and theology who has served as a high school history and foreign language teacher, a school district administrator, and a professor at Duquesne University.

Switala has published his book, “The Quest for God” which is a study of the explosion of interest in newer approaches to spirituality that took place in the west among Christians, Jew, and Muslims in the twelfth century. The book explores the historic internal and external forces that influenced members of the three major faith groups who were looking for new ways to approach their personal relationship with God. It contains a detailed explanation of the new attitudes and religious practices that emerged among the three groups during that century. This includes special emphasis placed on the mysticism of Christian monks and nuns, the Kabbalah of the Jews, and the tenets of Sufism in Islam. It also paints a clear picture of the role played by the leading figures, both male and female, who pioneered this effort.

A unique feature of the book is the linkage of similar imagery, biblical references, mystical attitudes, and actual religious practices utilized by all three faith systems to achieve a newer more mystical approach to spirituality. The fundamental development of spiritual approaches initiated by these three faiths laid the foundation for many of the spiritual practices we have today. Each of the three faiths is covered in a separate section. Preceding the discussion of the spiritual elements of each is a chapter dealing with the historical setting in which that faith operated. A final chapter summarizes the entire work and shows the common characteristics that each group had and links them together.

Readers who wish to experience this engaging work can purchase “The Quest for God” at bookstores everywhere, or online at the Apple iTunes store, Amazon, Google Play, or Barnes and Noble.