Recent release “The North America Model for the Book of Mormon: From Jerusalem to Cumorah” from Page Publishing author William Peter Midgley is the result of his years of familiarity with Book of Mormon stories, the work of many others who have researched and documented discoveries and scientific expeditions not available until recently that are significant in support of locations and travel movements in the Book of Mormon, and a systematic review of all Book of Mormon scriptures related to movements, directions, and relationships. 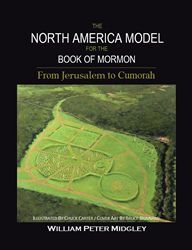 William Peter Midgley is a retired architect with over fifty-five years of experience, thirty-eight of which were spent as founding principal of his own firms, lifelong member of the Church of Jesus Christ of Latter-day Saints, and great-grandfather of 29. He has published his latest book “The North America Model for the Book of Mormon: From Jerusalem to Cumorah”: a fascinating resource using emerging technologies that allow meaningful scrutiny of the earth’s geography, not only from above but at ground level.

The search for the lands of the Book of Mormon has been an object of interest and conjecture ever since it was published in 1830. Many serious and well researched studies have been conducted for locations from South America, to Central America, to North America and beyond. Substantive theories have been generated and extensive academic treatises and books have been written and websites created to promote a wide range of models attempting to address the sites and locations of where the events took place. Each model has its proponents and its detractors, and each has credible scriptural, scientific and archaeological evidence to support elements of each model.

“The North America Model” indicates how close the historical and geographical footprint of the wars, contentions and travels of the Nephites and Lamanites may have facilitated the actual founding and preservation of the United States of America in the prophesied land of promise through the paths and trails that the ancient peoples who inhabited the land created and which were used not only by the colonists during the Revolutionary War but also in the course of the Civil War. The legacy of the Book of Mormon is more intimately intertwined with the United States of America, the promised land of liberty, than originally thought.

Published by Page Publishing, William Peter Midgley’s engrossing book unravels the geography of the Book of Mormon from Jerusalem to Cumorah that has been hidden in plain sight since 1830.

Readers who wish to experience this thought-provoking work can purchase “The North America Model for the Book of Mormon: From Jerusalem to Cumorah” at bookstores everywhere, or online at the Apple iTunes store, Amazon, Google Play, or Barnes and Noble.