Recent release “Baseball the Wright Way” from Page Publishing authors Clyde Wright and Jaret Wright is a compelling and enjoyable account of two big-time baseball careers: Clyde Wright was selected by the California Angels in the 1965 draft, and his son, Jaret, who was drafted tenth overall by the Cleveland Indians in 1994. 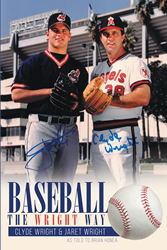 Clyde Wright, a Tennessee native who played Major League Baseball for ten years in addition to three years in the Japan Series, operated a pitching school for over thirty years, and has worked for the Angels for many years in community relations in Anaheim, where he lives with his wife, Vicki, and Jaret Wright, a former Major League pitcher with teams such as the Cleveland Indians, San Diego Padres, Atlanta Braves, New York Yankees, and Baltimore Orioles currently living in San Clemente, California, with his wife, Julie, and their four children, have completed their new book, “ Baseball the Wright Way”, an insider’s view into the world of professional baseball from two generations of major-league pitchers.

No hitters are rare in baseball. Father-and-son combinations are rarer. “Baseball the Wright Way” covers all those bases and then some.

Two pitchers with vastly contrasting styles, both Clyde Wright and his son Jaret Wright discuss the art and craft of pitching with an authentic, straightforward sincerity that will captivate all baseball fans.

In the mid-1960s, Clyde became the country boy from Tennessee who had his feet in LA when he made his debut with the California Angels. With his special brand of small-town, country charm, Clyde invites you to relive his journey from the farm to the major leagues, where he won one hundred games, tossed a no-hitter, made an all-star team, and played alongside and against many superstars and Hall of Famers in the backdrop of sunny Southern California. From there, Clyde spent three years pitching in Japan, forging many lifelong friendships in the Land of the Rising Sun. When his playing days were done, Clyde returned to Anaheim and launched a pitching school where he trained thousands of major-league-hopeful youths for decades.
One of those hopefuls was his son Jaret, who later carved out an eleven-year major league pitching career of his own that included starting game 7 of the 1997 World Series as a twenty-one-year-old rookie for the Cleveland Indians. Jaret picks up the story where his dad leaves off and moves candidly and honestly through his time in the major leagues, where he quickly rose to prominence and played with and against many of the game’s legends.

If readers are baseball fans, this book is right in their wheelhouse. If they are not a baseball fan, then Clyde and Jaret Wright will convert them with fascinating tales of life before, during, and after baseball.

Published by New York City-based Page Publishing, Clyde Wright and Jaret Wright’s engrossing book is a must-read for sports fans of all ages.

Readers who wish to experience this engaging work can purchase “Baseball the Wright Way” at bookstores everywhere, or online at the Apple iTunes store, Amazon, Google Play, or Barnes and Noble.