Authors Larry Holmes and Greg Armstrong’s new book “Don’t Tell Me I Can’t” is a fascinating memoir of the life and career of the boxing legend from Easton, Pennsylvania

Recent release “Don’t Tell Me I Can’t” from Page Publishing authors Larry Holmes and Greg Armstrong is a compelling ringside view of Larry Holmes’s illustrious career, thrilling victories, and the many challenges overcome in his pursuit of the highest honor in the boxing world over the course of nearly thirty years. 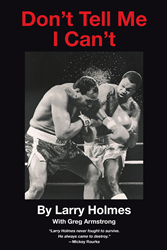 Larry Holmes, also known as the Easton Assassin after the Pennsylvania city in which he still resides with his wife, Diane, was Heavyweight Boxing Champion of the World from 1978 to 1985, and remains a proud member of the International Boxing Hall of Fame with a legendary career that spanned nearly three decades. Greg Armstrong is a retired CBS News producer and a recipient of the Edward R. Murrow Award in Broadcasting. He was involved in and covered the boxing scene throughout his entire career and now resides in New York State with his wife, Lisa, and their three cats. They have published their new book “Don’t Tell Me I Can’t”: a candid reflection on Holmes’s legendary career.

Larry Holmes is a boxing legend and often ranked by boxing historians as one of the best fighters to ever lace up the gloves. He held the heavyweight title for nearly eight years during what many fans and scribes consider the Golden Era of the sport. He fought his way to the pinnacle of success despite (and because of) unscrupulous promoters, crooked officials, naysayers, and the shark-infested waters of boxing’s movers and shakers.

But he kept on winning.

This is his story. Unfiltered and raw.

It’s told with the help of business associates, competitors, broadcasters, friends, and family.

This is Larry Holmes’s tell-all view of his career and the boxing world. His observations, opinions, and insights bring you into the ring for his most noted fights (Norton, Ali, Cooney, Shavers, and Tyson) and shares with the reader what he thinks and how he feels.

Readers who wish to experience this engaging work can purchase “Don’t Tell Me I Can’t” at bookstores everywhere, or online at the Apple iTunes store, Amazon, Google Play, or Barnes and Noble.